New figures from the Central Bank reveal that while household debt continues to decline here, it remains the fifth highest in the EU.

The country's debt burden has been reduced by €43 billion over the last ten years.

Today's Household Credit Market Report, which provides a "deep-dive" into the overall household credit market, also shows that the value of new mortgage lending in the second quarter of this year stood at €2.25 billion.

It noted that first-time-buyers accounted for almost half of new mortgage lending and refinanced mortgages for about 14%.

40% of first-time-buyers this year had a loan term greater than 30 years, while the share of new lending for borrowers aged 30 and under has declined from a just under a third in 2006 to 14%.

The Central Bank also noted that on average, first-time-buyers in Dublin spend a quarter of their net monthly income on mortgage repayments while outside of Dublin they spend a fifth. 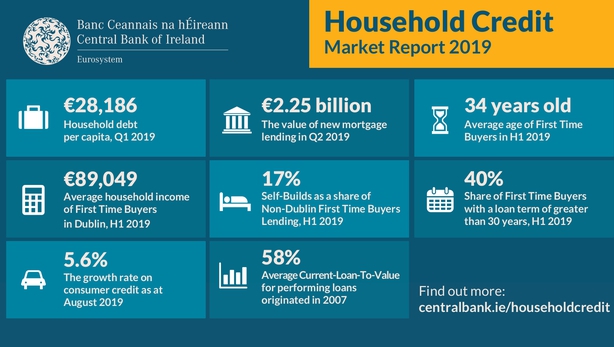 Meanwhile, the share of new mortgages with fixed rates for five years or more increased from 15% in 2017 to 33% in the first half of this year, the Central Bank said.