Vernon Hill, the founder of Metro Bank, has stepped down as chairman two months early, as the British lender continues its battle to recover from an accounting scandal.

US entrepreneur Hill, who launched Metro Bank almost a decade ago, has agreed to accept the honorary position of emeritus chairman.

He will remain a non-executive director of the bank until December 31, the bank said today.

Board member Michael Snyder will be interim chairman until a permanent successor is appointed, subject to regulatory approval.

News of Hill's exit follows a near-catastrophic year for Metro after it disclosed a major accounting error that had under-reported its exposure to higher-risk loans by almost £1 billion.

The bank, famed for its glossy branch network and unconventional customer perks including pet treats and weekend opening hours, was later forced to raise capital at expensive rates to plug the gap in its balance sheet.

It is due to report third quarter results later today.

British regulators have yet to take any action against Metro or its management team for the January accounting error but the lender has warned that possible penalties could be substantial and could lead to criminal investigations.

Metro had said in July that Hill, who regularly referred to the bank's customers as 'fans', would step down from his role after a permanent replacement had been found.

The bank did not say why that plan had changed, but a spokeswoman said the decision was entirely Hill's and was not linked to the ongoing regulatory probes. 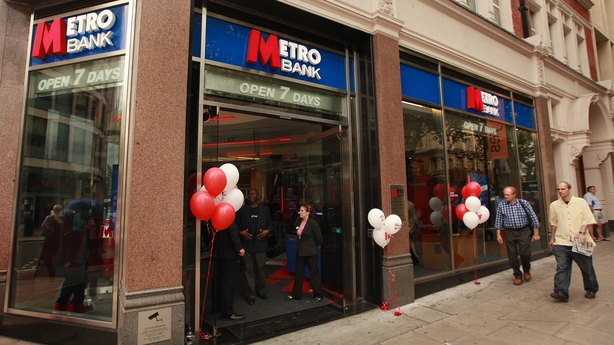 "The board thanks Vernon for his vision which inspired and created Metro Bank ten years ago. He leaves a lasting legacy of creating fans through exceptional customer service and has revolutionised British banking," Michael Snyder said in a statement.

While customers warmed to his publicity shots starring pet dog Duffy, Hill endured a fractious relationship with some investors, both before and after the accounting error.

Metro originally claimed it had discovered the mistake before later admitting the Prudential Regulation Authority had uncovered the error first, leading to a crisis of confidence over the quality of the bank's corporate governance.

Some investors also raised concerns about Hill's lack of independence and questioned payments made to his wife's architecture firm, which Metro later said would be phased out.

But he survived two threatened rebellions over his chairmanship and the bank's shares, which have shed almost 90% this year, were broadly flat in response to the news today.