Property prices in Dublin were down 0.3% in the year to August, with house prices in the city falling by 0.6% and apartment prices rising by 0.7%.

Dublin property prices had slowed by 0.2% in the year to July - the first drop since 2012.

The CSO noted that the highest house price growth in Dublin in August was in Fingal at 2.3%, while Dun Laoghaire-Rathdown saw a decline of 6.1%.

Overall, residential property prices increased by 2% nationally in the year to August. The CSO said this compares with an increase of 8.9% the same time last year.

Residential property prices in the rest of the country were 4.4% higher in the year to August, with house prices up by 4.1% and apartments rising by 5.3%.

The region outside of Dublin that saw the largest rise in house prices was the Border at 13.1%, while the Mid-East recorded a decrease of 0.8%.

August also saw prices in the Mid-East of the country - Wicklow, Louth, Meath and Kildare - fall by 0.8% - the region's first drop since November 2013.

The CSO said that property prices nationally have increased by 85.2% from lows in early 2013. 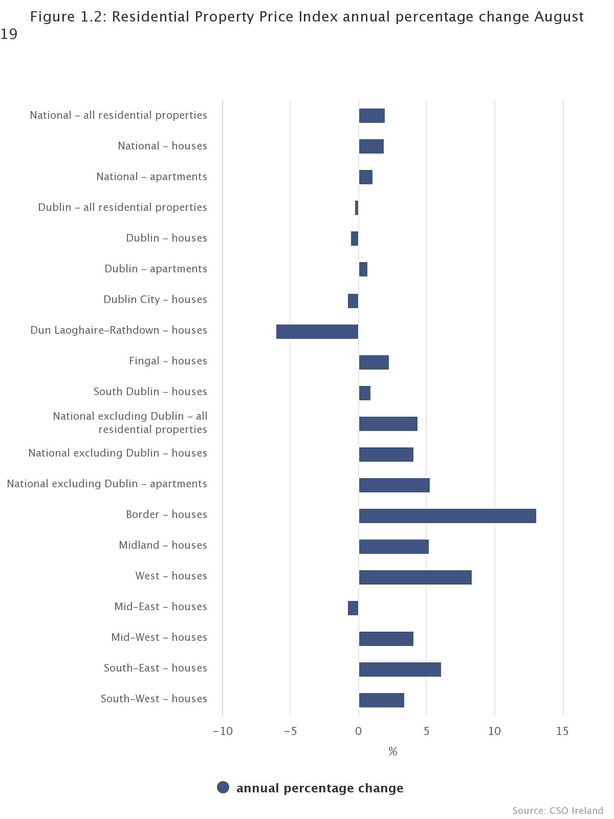 Today's CSO figures also show that consumers paid a median price of €255,000 for a home in the 12 months to August.

Meanwhile, a total of 44,910 household dwelling purchases were filed with Revenue in the year to August.

Revenue data shows that there were 1,202 first-time buyer transactions in August, an increase of 3.2% on the 1,165 recorded in August of last year.

These purchases were composed of 329 new dwellings and 873 existing dwellings, the CSO said.