Inside the briefing room of the Department of Finance, tucked away in a corner, are two white painted steel window shutters hanging on a frame.

It's not a conceptual art work. The Department is far too prudent for that.

Upon closer inspection, an inscription reveals that they’re sniper shields which were used to protect the windows of the Department building during the Civil War.

The Department is not, thankfully, preparing for war. But it is planning for a hard Brexit.

That means everything that happens - or doesn’t happen - in next week’s Budget will be framed and measured by what a collapse in the normal functioning of trade between ourselves and the UK will bring.

The Department of Finance has gone some way to sketch out what this may mean.

Its forecasts for growth next year have been slashed, from an increase in GDP of 3.3% to just 0.7%. What does that mean? It means approximately €10 billion euro less in the economy. It could mean up to 55,000 fewer people in work. 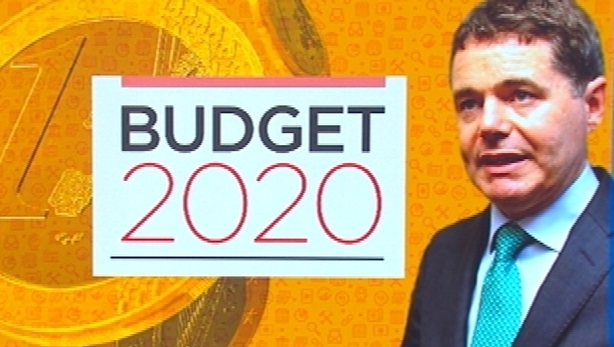 The Central Bank, the ESRI and various think tanks have all made similar predictions. But the brutal truth is no one can be really sure, because no one knows if there really will be a hard Brexit. And if there is one, no one knows how long it will last. And absolutely no one knows how people will respond if it does comes to pass.

So put all of those unknowns into the highly sophisticated machine the Department uses to makes its calculations of how much it may need to spend next year and how much it can expect to collect in tax and you can almost smell the smoke from the whirring cogs as it attempts to come up with an answer.

Next week's Budget will be a massive leap in the dark.

So far, the Government seems to have adopted a strategy of minimal action. It has played down any moves on income tax beyond adjustments to ensure those on the minimum wage continue to pay minimal amounts of tax and USC.

Wages in the economy are increasing at an average of 3% a year or so. That means, if there’s no move to adjust the standard rate band, credits or USC thresholds, more people will be paying more tax. The Fiscal Advisory Council has calculated this will raise €600m for the Government. But tinkering with income tax costs money and any change here would soak up a lot of the Minister’s stated room for manoeuvre.

If the Government sticks to spending over tax cuts, the response to this Budget will be key to understanding what’s more important in the minds of voters. Fianna Fáil has said this will be the final Budget of its confidence and supply arrangement with the Government.

The Government has given a range of what it may have to borrow next year in the event of a hard Brexit. It will range from 0.5% to 1.5% of GDP, which means upwards of €5bn.

Some of that will go on increased social welfare payments for those who lose their jobs. But a key focus of attention will be the schemes the Government plans to put in place to support the jobs and regions exposed to the impact of Brexit.

And then there's the promised action on climate change. It’s widely expected that the carbon tax will be increased by between €6-€8 euro a tonne. That would add about €1.20 to an average fill of petrol. Environmental groups have already described this as not enough to change behaviour. Close attention will be paid to see if the Minister gives any sign of committing to future increases in the carbon tax which could see it climb to €80 a tonne by 2030.

There’ll be close attention too to the fund which will ringfence the additional revenue raised by the carbon tax.

Budgets are far more predictable than in the past. Fiscal rules, adopted at the height of the crisis, limit what a Minister for Finance can do. Various watchdogs keep a close eye on how ministers stick to them. And there are regular, well documented updates on the public finances throughout the year.

Despite all of this sophisticated financial architecture, there are still surprises. But even the biggest Budget surprise will sound like a deflated party whistle compared to the klaxon blare of Brexit.