Brokers and financial advisers will no longer be able to describe themselves as independent if they accept commission from product providers in circumstances where advice is provided.

This is under new Central Bank rules which are set to come into force next year.

The intermediaries will also not be allowed to accept free hospitality including golf trips and sporting event tickets from the banks and insurance companies whose products they sell.

The changes are part of an effort by the financial regulator to boost transparency around the commission arrangements between financial intermediaries and product providers and to minimise the risk of conflicts of interest.

Brokers say they are extremely disappointed at the ban on the use of the word independent where they are paid by commission as it would take away choice from consumers about how they pay for independent advice.

"For brokers, being able to state that they offered independent advice was a cherished hallmark, distinguishing their services from those of banks and other tied agents," said Diarmiud Kelly, chief executive of Brokers Ireland. 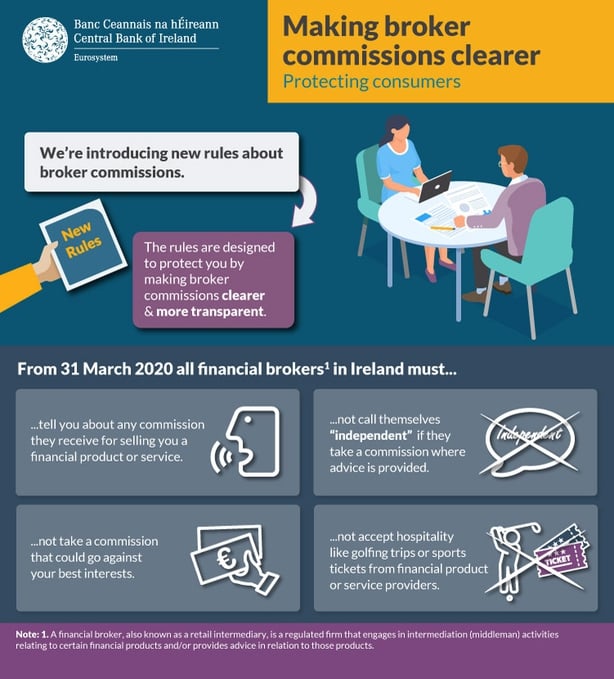 "Given that most consumers prefer to pay by commission, the term 'independent' may well simply disappear, meaning the regulator will not have created an independent/non-independent service differentiation, but may instead have succeeded in removing the label 'independent' from the market," he added.

"What we're ensuring here is that brokers who call themselves independent truly are independent, and they're not receiving commissions from a bank or insurance company that might influence what advice it might give you or I as customers," she said.

"We think that a number of independent brokers will remain, and we know from our research that customers actually have a willingness and an appetite to pay for advice and there's very valuable advice out there in the market, provided by excellent brokers."

The new policies will also require brokers and financial advisers to publish summary details of the commission they receive from product producers, such as insurers, banks and other firms.

This must include an indication of the agreed amount or percentage of any fee, commission or other remuneration as well as an explanation of the arrangement.

Central Bank to ban free tickets, trips for brokers from next year pic.twitter.com/n5GMzvPnAx

In order for commission to be deemed acceptable, certain criteria will have to be met by intermediaries.

If commission is found to be connected to targets that do not consider a consumer's best interests, then a conflict of interest will arise, the new regulations state.

However the Central Bank stopped short of introducing a total ban on commissions.

"From our perspective it's important that a customer knows exactly what they're paying for," Ms McEvoy said. "By banning commissions you could end up in a situation where a customer may not have access to financial advice.

"By allowing commissions that are structured in an appropriate way, that are very clear to the customer exactly what you're paying, they can actually give access to financial services and products for all customers in the market, regardless of whether they have the financial means to pay for advice up front or not."

In circumstances where non-monetary benefits are received in place of commission, the service providers will have to demonstrate that the quality of the service to the consumer is improved as a result of them accepting it.

"We will not allow hospitality such as golf trips and sporting event tickets as we consider such benefits are designed to influence an intermediary to place business with a particular provider rather than to provide any direct benefits to consumers," said Ms McEvoy.

"These amendments to the Consumer Protection Code will reduce the potential for bias on the part of financial intermediaries and will provide consumers with access to more information about how intermediaries are paid."

Brokers and financial advisors will still be able to accept invitations to conferences, for example, if they can demonstrate it has a direct benefit to customers, but the Central Bank does not feel that this will serve as a loophole for firms looking to reward intermediaries.

Although strongly opposed to the ban on the use of the word independent, Brokers Ireland said it welcomed the changes to the commission payment system saying there is little evidence of it having been an issue of concern for consumers.

"The reality is that consumers overwhelmingly choose that their broker be remunerated by commission, rather than by fees," Mr Kelly said.

"Transparency in relation to these payments is not an issue, it is already at a high level and disclosed to consumers."

The organisation also said it has no objection to free hospitality being banned as there is no evidence that it is an issue in the market.

The Central Bank has been examining the rules for almost two years and conducted a consultation on a draft set of rules in 2017 with interest groups.

The new regulations will be included in the Consumer Protection Code 2012 and will come into force in at the end of March next year.

The Central Bank uses a range of methods to monitor compliance with consumer protection requirements including inspections and reviews on particular topics.

Supervisors have the power to request details of any non-monetary benefits provided to an intermediary and brokers and financial advisers will be obliged to give this information where asked.

If the rules are breached, the regulator has a range of options open to it for sanctioning the intermediary concerned, ranging from a warning up to a fine.