Tension in the Middle East remained elevated, however, after Saudi Arabia said it would provide evidence linking Iran to the attacks.

The US had already said it believed the attacks against the world's top oil exporter originated in southwestern Iran. Iran has denied involvement in the strikes.

Oil prices had tumbled 6% yesterday after the Saudi energy minister said the kingdom had restored oil supplies to customers at their level before the attacks by drawing from its inventories.

"As much as the Saudis have downplayed the extent of the latest outages, we should not be lulled into a false sense of security," said Stephen Brennock, of London-based oil brokerage PVM.

"Tensions in the region are still running high and the spectre of a further escalation is hanging over the oil market," the analyst added. 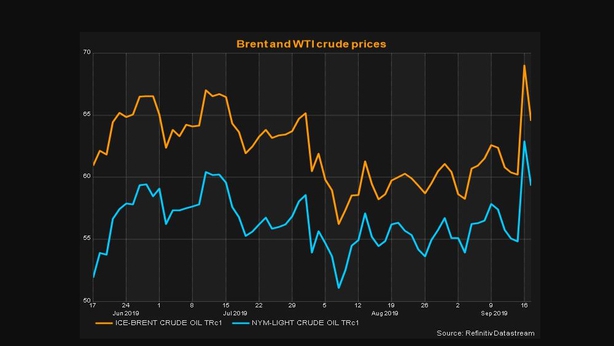 He also said that this month's oil supply commitments to customers would be met fully.

Relations between the US and Iran have deteriorated since US President Donald Trump pulled out of the Iran nuclear accord last year and reimposed sanctions on its oil exports.

"The oil market is facing challenging times. Recent attacks on oil facilities in Saudi Arabia have painfully demonstrated the risks to oil supply, which is why short-term price spikes are possible at any time," said Commerzbank analyst Carsten Fritsch.

"Demand growth is weakening, oil supply outside OPEC is rising significantly and OPEC+'s production discipline has faded recently," he said.

The Organization of the Petroleum Exporting Countries and a number of other oil producers including Russia agreed last year to cut output by 1.2 million bpd to reduce global stocks and prop up prices.