Beef and sheep farms, which account for seven out of every ten farms, face "significant viability challenges" and are heavily reliant on direct payments, according to new analysis from the Central Bank.

In total, the Central Bank has said one third of all farms are classified as "economically vulnerable".

An Economic Letter from the bank finds that "the imminent risk of a damaging Brexit outcome looms large over the sector and has compounded long-running concerns over low incomes."

It says that any future negative shock - even one less material than Brexit  - would further "expose the underlying weaknesses in the sector."

The study also finds the negative impact of Brexit on Irish farming will not be evenly distributed, adding that the west, mid-west and midland regions are both "less resilient and more exposed" than the south and east.

The study finds that beef production is the most common farm type or activity, accounting for over half of all farms in 2016. Dairy farms accounted for just under 12% of all farms and sheep farms totalled 11%.

The research also shows that dairy farms had the highest family farm income in 2018 of €61,446. Tillage farms had the second highest of just under €41,000.

Other farming systems such as sheep and cattle farms have very weak profitability and have a high dependence on direct payments.

The research says that the beef sector "stands out as being particularly exposed to Brexit".

"The sector is heavily reliant on the UK market, faces high tariffs in a hard Brexit scenario and has a significant concentration of smaller farms with low or negative market incomes," the Central Bank added. 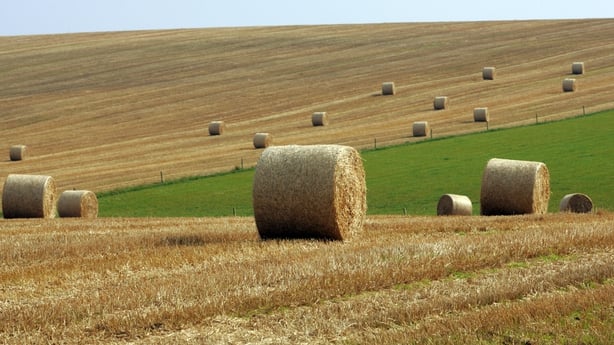 The Central Bank research also showed that primary agriculture, along with food processing and the production of drinks, employed a total of 153,000 people in the first quarter of 2019, or just under 7% of all jobs.

The agri-food sector generated just over €13 billion in exports last year, around 10% of the country's overall merchandise exports.

Mark Cassidy, Director of Economics and Statistics at the Central Bank, said that agriculture makes a significant contribution to the Irish economy and also has important distributional effects in the economy.

But he cautioned that low profitability in certain sectors and high reliance on direct payments are weaknesses in the sector that should not be ignored.

"It provides the context in which all other risks facing Irish agriculture should be considered. With this in mind, risks such as a no-deal Brexit or other negative shocks have the potential to exacerbate existing challenges facing some farmers," he added.