The economy - when measured by gross domestic product - grew by 0.7% the second quarter of this year compared to the first quarter, new figures from the Central Statistics Office show today.

On an annual basis, the economy grew by 5.8%, the CSO added.

Irish GDP has outperformed everywhere in the EU each year since 2014.

The economy has so far largely brushed off Brexit uncertainties but the Government has warned that a no-deal Brexit could lead to a sudden economic contraction.

The Finance Department had forecast in April that GDP would grow by 3.9% this year.

Due to close trade links with the UK, the Department said the economy could flatline next year in a no-deal Brexit scenario, rather than grow by 3.3% in an orderly withdrawal.

Today CSO figures show that when the profits of multi-national companies are excluded from the overall figures, the country's GNP decreased by 2.8% in the second quarter.

Meanwhile, the quarterly GDP growth for the first three months of the year was revised up by the CSO to 2.7% from an initial estimate of 2.4%. The annual figure was amended to 7.4% from 6.3%.

That meant GDP was growing at a rate of 6.6% at the halfway point of the year, the CSO said. 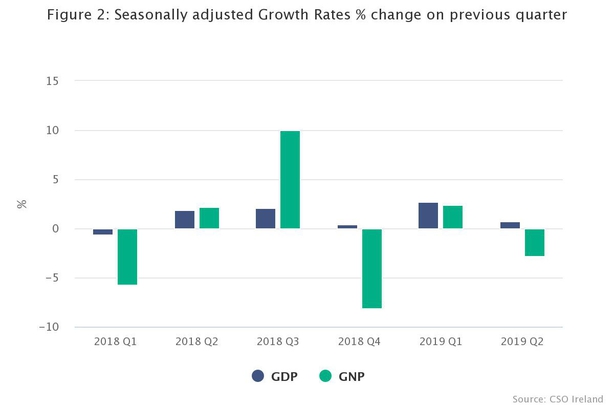 Many economists prefer to use the labour market as the most accurate barometer of how Ireland's open economy is doing, as the relevance of using GDP diminished when 2015 growth was adjusted up to 26% after a massive revision to the stock of capital assets.

Such distortions, related to the country's large cluster of multinational companies, inflated the figures again last year when the conventional measure for economic performance posted growth of 8.2%.

The labour market here is close to capacity with unemployment at 5.2%.

The CSO has begun to phase in new measures which strip out some of those globalised activities. One such data point, modified total domestic demand, rose by 1.9% on the quarter.

Today's CSO figures reveal that industry grew by 5.7% in volume terms in the three months from April to June, while the information and communication sector increased by 8.1%.

In the domestically focused sectors, the construction sector recorded growth of 0.4% while the distribution, transport, hotels and restaurants sector slowed by 0.2%.

Meanwhile, the agriculture, forestry and fishing sector recorded an increase of 3.9% in the quarter.

Commenting on today's CSO figures, the Minister for Finance said that they are consistent with an economy that is continuing to grow. 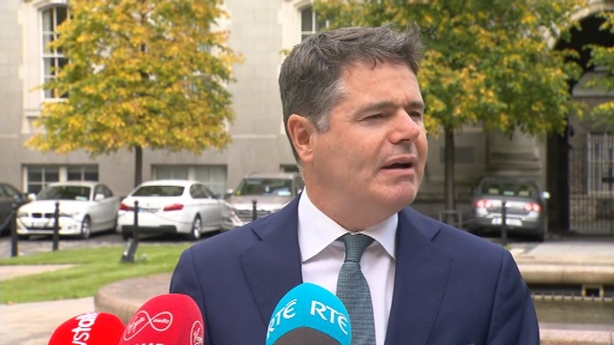 Paschal Donohoe said that while annual growth in GDP remains strong, growth in the domestic economy is moderating to more sustainable levels, with modified domestic demand up 2.9% year-on-year.

"More broadly, the figures are very much in line with a range of other indicators such as employment growth and taxation receipts.

But he also cautioned that the risk of a no-deal Brexit hangs over the economy, with business and consumer confidence softening as a result.

"As the Government outlined this week, the impact on the most-exposed sectors of the economy from a disorderly Brexit could be very severe," he stated.

Minister Donohoe said that careful management of the economy and of the public finances is needed now more than ever ahead of the uncertain times facing the country.

"This is why we are planning the Budget on the basis of a no-deal Brexit; this is the safest approach," he added.

Separate figures from the CSO show the country's current account had a large deficit in the second quarter of the year. 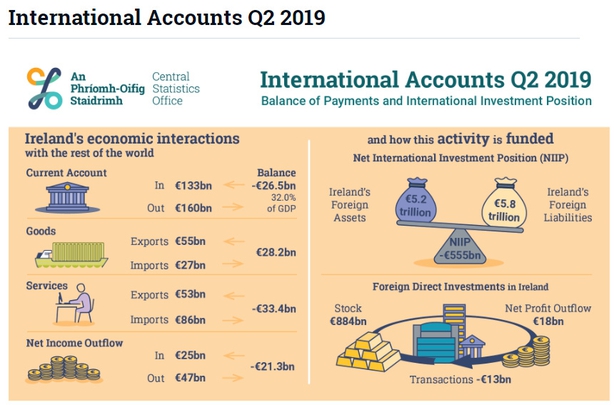 The Balance of Payments current account measures the country's economic flows with the rest of the world.

The Current Account recorded a deficit of €26.5 billion in the second quarter of 2019, compared with a surplus of €10.6 billion the same time last year.

"The change in the overall balance was driven by an increase in intellectual property imports and we see imports of business services increasing to €54.8 billion in the quarter compared to €16.7 billion in Quarter 2, 2018," the CSO said.

"We also observed continued strong growth in exports of computer services in the quarter, now worth over €27 billion," it added.

The CSO also recorded the current account transactions with the UK in the three month period.

These results show a surplus of €2.1 billion for trade in goods and services with the UK in the second quarter, which was offset by a deficit of €4.4 billion for income flows.

This gave an overall Current Account deficit of €2.3 billion with the UK in the quarter, compared to a deficit of €1.8 billion in the second quarter of last year, the CSO said.