Marks & Spencer chairman Archie Norman has said he is unperturbed by the British retailer's share price slide, with his focus on the long term.

But relegation from the prestigious FTSE 100 index is a symbol of the company's decline.

The 135-year-old food and clothing high street retailer has been in the blue-chip index since its launch in 1984.

But its shares have slid 36% over the last year as investors lost faith after a decade of failed reinventions and three years of profit falls.

M&S was ejected in a quarterly reshuffle of the London index, based on yesterday's closing share price of 187 pence, which gave it a market value of £3.64 billion.

FTSE Russell, the index provider, confirmed M&S's exit after the end of trading this evening, with the change taking effect on September 23.

Though largely symbolic, this will see M&S sold by funds which seek to replicate the FTSE 100 by buying its constituents. It would, however, be bought by FTSE 250-tracker funds.

M&S, which is not scheduled to update the market until it publishes financial results on November 6, declined to comment.

Founded in 1884 on a market stall in northern England, M&S flourished in the second half of the 20th century, bringing innovations to Britain such as ladder-resistant stockings and avocados.

In 1998 it became the first British retailer to make more than £1 billion of annual profit.

For older Britons, M&S was the obvious place to buy basics such as socks and underwear, as well as more formal shirts, suits for work and comfortable sweaters for the weekends - all sold under the St Michael brand.

Its painful decline reflects an inability to effectively compete on clothing with the likes of Zara and H&M. 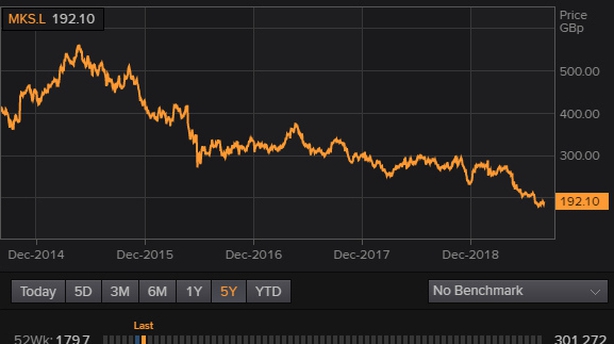 It has built up a well regarded food business that seeks to combine convenience and indulgence.

That now accounts for more than half of its annual revenue but margins have come under pressure from the march of discount chains.

M&S set out on its latest turnaround plan shortly after retail veteran Norman became chairman in 2017 to work alongside Steve Rowe, who has been with the company for three decades and became its chief executive in 2016.

Norman made his name turning around supermarket group Asda in the 1990s and latterly broadcaster ITV.

He said in May last year that M&S was targeting sustainable, profitable growth in three to five years and has been instrumental in speeding-up the pace of change, with the firm closing weaker stores, revamping ranges and investing online.

His boldest move yet was striking a £1.5 billion joint venture with online grocer Ocado to give M&S a home delivery service for food.

But it also noted continuing failures in product availability - a factor in the sacking of clothing boss Jill McDonald days later.

For Norman, dropping out of the FTSE 100 will not be a new challenge, and when asked in May 2018 about the prospect of relegation he said it was "of no interest", adding he would look at the M&S share price in three to five years time.

And this May he told reporters: "When I went to ITV we dropped out of the FTSE 100, the sky didn't fall in. The business was the same business the day after."