Norwegian Air is asking bondholders for up to two more years to pay back $380m of outstanding debt, in the loss-making airline's latest attempt to shore up its finances.

The company said today it would pledge lucrative take-off and landing slots at London's Gatwick Airport as security.

Norwegian Air is Europe's third-largest budget airline by passenger numbers after Ryanair and EasyJet and has shaken up the market with cut-price transatlantic fares.

But its rapid expansion has left it with hefty losses and high debt.

It was forced to raise 3 billion Norwegian crowns ($335m) from shareholders this year, and said today its working capital had decreased in 2019, partly due to tighter industry rules on advance ticket payments.

It also said the worldwide grounding of Boeing's 737 MAX plane was lasting longer than expected, dealing another blow to its finances. Norwegian has 18 of the aircraft.

The company's bonds, which mature in December 2019 and August 2020, will be extended to November 2021 and February 2022 if bondholders accept the revised terms.

A bondholders' meeting will take place on September 16.

"What we are doing now is to make sure that we have sufficient liquidity for the next twelve months," interim chief executive Geir Karlsen told Reuters, adding he expected to repay bondholders with cash on hand.

The airline's co-founder Bjoern Kjos stepped down as CEO in July in a move some analysts said could make it easier to sell the airline after talks about a deal with Aer Lingus parent IAG fell through in January.

Shares in IAG, as well as those of Ryanair and Wizz Air, rose today on speculation there could be more consolidation in a sector that has for months struggled with overcapacity, traders said.

In May, Ryanair boss Michael O'Leary predicted four or five European airlines were likely to emerge as industry winners. 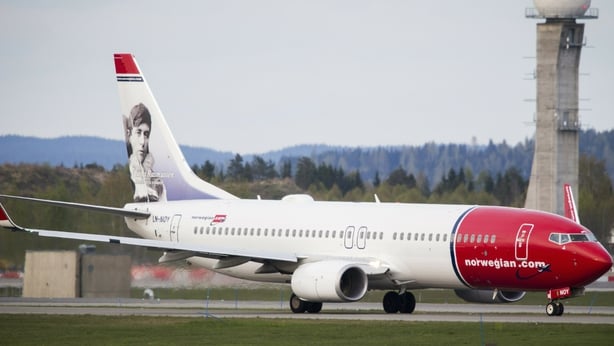 Another problem for Norwegian is the grounding of Boeing's 737 MAX jet since March following two deadly crashes.

"There is no visibility that we know of when the aircraft will be up in the air again. We are actually planning on not having the MAXs flying this year, in 2019," Karlsen said in the interview, echoing recent comments from peers.

Norwegian said in July it expected the grounding to end in October and to cost it 700 million crowns in 2019.

Overall, Norwegian's operating performance has improved since mid-July, but its working capital has decreased this year, the airline said today.

It expects earnings before interest, taxation, depreciation, amortisation and aircraft ownership costs (EBITDAR) of 6-7 billion crowns ($670-$782m) in 2019 and higher earnings in 2020, the company said.

"Right now it looks like we will end up in the middle of that window, which means we have doubled EBITDAR compared to 2018," Karlsen said. "So the underlying performance is definitely moving in the right direction."

Historically, the company has relied on advance ticket payments by credit card, but tightened industry terms have made this more difficult.

It said working capital was down by about 4 billion crowns compared to the second quarter of 2018 as a result.

Last month Norwegian Air said it would stop flying from Ireland to the US and Canada from the middle of September as the routes had become commercially unviable.

"Compounded by the global grounding of the 737 MAX and the continued uncertainty of its return to service, this has led us to make the difficult decision to discontinue all six routes from Dublin, Cork and Shannon to the US and Canada from 15 September 2019," the company had said in a statement.

The airline said it would refund customers who no longer wished to travel from Ireland to the US and Canada via other destinations. It will continue to fly from Dublin to Oslo, Stockholm and Copenhagen.

Norwegian launched flights from Ireland to North America in 2017, three years after introducing the UK's first low-cost, long haul flights to the US.