Permanent TSB has given an indication that it may cut its variable interest rate offering further.

CEO Jeremy Masding was speaking ahead of the European Central Bank dropping broad hints that it was ready to cut interest rates in September.

The average variable rate at Permanent TSB is 4.16% which is well ahead of the European average and more expensive that most of its competitors in the Irish market.

The bank implemented a number of cuts to its fixed rate offerings last year and introduced a 7 year fixed rate this year.

"There are certain customer cohorts where we could be more competitive. Our rates are reviewed all the time based on the various inputs," he said.

In the event of the ECB cutting the base rate into negative territory from zero at the moment, tracker customers would automatically benefit.

Tracker mortgages account for 57% of PTSB's total loan book, down from 63% previously.

Jeremy Masding was speaking as the bank reported a profit before tax of €28m for the six months to the end of June, almost half the amount reported the same time last year.

But the bank said its business performance continues in line with expectations.

The bank said its total new lending volumes increased by 22% year-on-year and its market share of new mortgage lending increased to 14.7% from 13.8% the same time last year.

Its overall net interest income fell by 6% as a result of reduced income from non-performing loans on the back of loan sales in 2018 and lower treasury income.

Permanent TSB also today reported a net interest margin (NIM) -  the difference between the average rate at which it funds itself and lends on to customers - of 1.82%.

"I'm really happy with the underlying commercial performance," Jeremy Masding, Permanent TSB's chief executive said. "The business is in good shape, new lending is up 22%, mortgage market share is nearly 15%, so the foundations for future growth are really strong."

Mr Masding described the fall in profits as a "natural consequence for the significant level of loan sales" that the bank has undertaken in the past year. 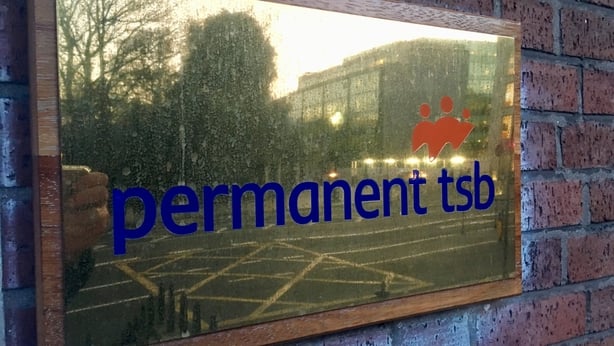 However he said the profits the bank is now making are of a "higher quality" and relate to a "stronger bank".

The bank said its non-performing loans (NPL) stood at €1.7 billion, adding that its NPL ratio remains at 10% - higher than regulatory guidelines.

It said it remains committed to reducing the NPL ratio to mid-single digits in the medium term.

At the end of June, PTSB said it had 882 properties in possession, with 372 for sale. Most of these were voluntarily surrendered buy-to-let properties.

"The bank is satisfied with the progress being made to date and expects to sell the majority of these properties through various arrangements over the next 12 months," Permanent TSB said.

The latest results also include a €3m charge relating to the Central Bank's investigation into tracker mortgages.

That led to a fine of €21m for PTSB in respect of "serious failings" which affected 2,007 of its tracker mortgage customer accounts.

"As the bank had made relevant provisions in prior years, the financial impact [of the fine] in the 2019 financial accounts is €3m," PTSB added.

The bank said the Central Bank's examination and enforcement process had concluded - however the regulator continues to investigate whether individuals working in PTSB and other banks at the time can be held culpable.

Mr Masding said he was confident that no-one still working at the bank had personal responsibility for the controversy.

"I think it's important to state that the tracker issues happened nearly a decade ago," he said. "I am confident [that the people involved aren't involved in the bank anymore]."