China's economy grew at its slowest rate in nearly three decades in the second quarter, according to an AFP survey of analysts, hit by the US-China trade war and weakening global demand.

The world's second largest economy is expected to have expanded by 6.2% in the three months from April to June, the poll of 10 economists predicted.

The prediction comes ahead of the official release of gross domestic product figures on Monday.

The reading would mark the worst quarterly growth in almost three decades but stay within the government's target range of 6-6.5% for the whole year. The economy grew by 6.6% last year.

Beijing has stepped up support for the economy this year but the moves have not been enough to offset a domestic slowdown and softening overseas demand for its toys, gadgets and electronics.

Policymakers are likely to take further action, analysts say, with Premier Li Keqiang presiding over a state council meeting this week that pledged to lower tariffs and step up tax rebates for exporters.

Beijing pushed forward a raft of stimulus measures earlier this year to cushion the impact from its cooling economy, increasing spending on roads, railways and other big-ticket infrastructure projects, and tax cuts worth 2 trillion yuan ($297 billion) kicking in from April.

The policies buoyed the economy in March and brought in 6.4% growth for the first quarter, but it proved no more than a short-term panacea.

Industrial output surged 8.5% in March before tumbling in April and dropping to 5% growth in May, the slowest increase since 2002.

Imports and exports both shrank in June from a year earlier.

But sales of big-ticket items such as cars have not held up, with sales down 12.4% in the first half of the year, according to the China Association of Automobile Manufacturers. 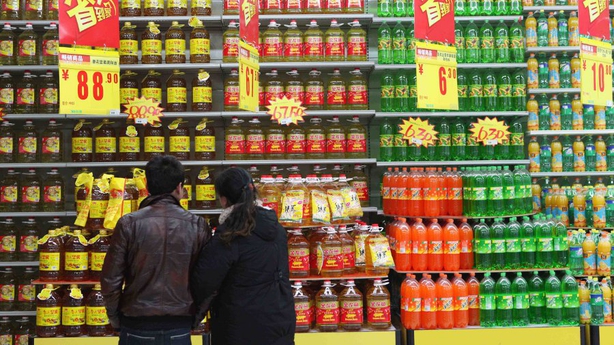 Analysts widely expect Beijing will step up with further easing in coming months.

The overall downward trend gives President Xi Jinping little room to fight back forcefully against the US, which is using tariffs as leverage to try to force China into opening up its economy.

Washington and Beijing have hit each other with punitive tariffs covering more than $360 billion in two-way trade and damaging manufacturers on both sides of the Pacific.

US President Donald Trump and Xi agreed to revive negotiations when they met on the sidelines of the G20 summit in Japan on June 29.

Top US and Chinese negotiators held phone talks on Tuesday but it remains unclear if the wide rupture that has formed since talks broke down in May can be patched over.

On Thursday Trump raised eyebrows with a tweet accusing China of not fulfilling a pledge to buy more agricultural goods, adding: "Hopefully they will start soon!"

Data released todayshowed China's purchases of US goods fell about 30% so far this year while its exports shrunk about 8%.

It has sent China's trade surplus with the US up to $140 billion during the first six months of the year, from $134 billion last year.