The Irish economy grew 8.2% last year, according to new data released by the Central Statistics Office.

Gross Domestic Product, a measure of the total output of an economy, stood at €324 billion for the year, the CSO said.

But when the profits of multinationals were stripped out, as measured by Gross National Product or GNP, the economy grew at the smaller rate of 6.5%.

The GDP figure is higher than anticipated when the CSO reported provisional data in March, when it was estimated that it would come in at 6.7%.

When measured using Modified GNI*, the debt ratio stood at 104%. 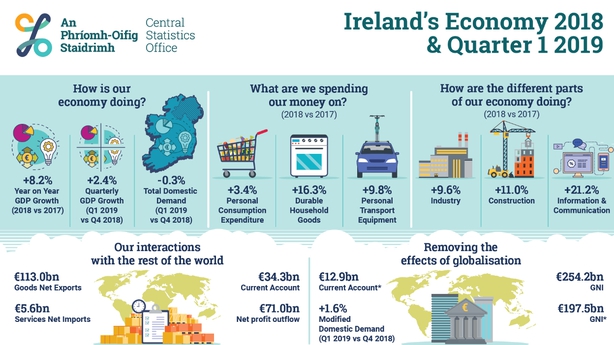 The significant economic growth in 2018 was driven by a 10.4% rise in exports of goods and services.

Among the areas of the economy where multinationals are most active, growth in the ICT sector registered a 21.2% expansion.

Meanwhile, in the domestically focused economy, the distribution, transport, hotels and restaurants sectors grew by 6.6%.

The positive growth trend continued in the first quarter of this year, albeit at a reduced rate, with GDP growing by 2.4% between January and the end of March.

GNP rose 2.1% during the same period.

The ICT sector expanded by 11.5% over the three months, while in the domestically focused economy, construction activity rose 5.6%.

The distribution, transport, hotels and restaurant sector registered a modest contraction of 0.1%.

On the international trade front, the current account of the Balance of Payments recorded a surplus of €11 billion in flows with the rest of the world between January and March, down from €11.3 billion in the same time last year. 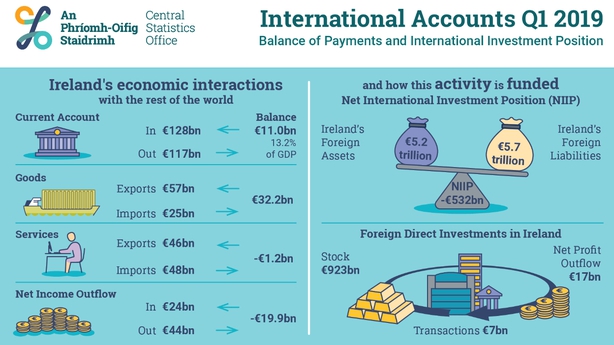 The accounts also include Balance of Payments Current Account transactions with the UK, which show a surplus of €1.4 billion for trade with the UK in the first thee months of the year.

The CSO said this trade surplus was offset by a deficit of €2.9 billion in income flows, giving an overall current account deficit of €1.6 billion with the UK in the quarter.

Computer services exports rose by €5.7 billion in the quarter, compared to the same quarter a year earlier, the CSO noted.

Irish GDP growth has outperformed the rest of the European Union every year since 2014, undeterred by Brexit.

The Government has warned that Brexit could lead to a sudden contraction if the UK left without a transition agreement, which it does not yet have.

The strong first quarter also tallies with striking jobs numbers for the first three months of 2019. 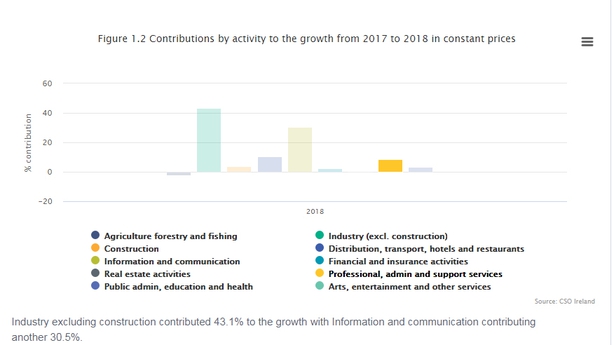 The labour market, already close to capacity with unemployment below 5%, added new workers at the fastest pace since Ireland's economic recovery began.

Many economists use the labour market as the most accurate barometer of how Ireland's open economy is doing.

The relevance of GDP diminished when 2015 growth was adjusted up to 26% after a massive revision of the stock of capital assets.

Such distortions, related to the country's large cluster of multinational companies, inflated GDP again for the last two years.

In its quarterly economic forecasts yesterday, the European Commission said that the Irish economy - as measured by GDP - will grow by 4% this year before moderating to 3.4% in 2020.

The commission predicted that the Irish economy will continue to grow at a solid pace, but warned that the risk of overheating could increase in the near term.

Commenting on today's CSO figures, Minister for Finance Paschal Donohoe said the "continued softness in the international environment" and Brexit showed the need for careful management of the economy.

Ibec chief economist Gerard Brady said the negative impact of mounting global trade tension, whilst not targeted at Ireland directly, will inevitably wash up on our shores.

"How long these tensions last, and their ongoing reverberations will have a big say in the future of open economies such as ours," he added.