The European Commission has predicted that the Irish economy will continue to grow at a solid pace but warned that the risk of overheating could increase in the near term.

In its quarterly economic forecasts, the Commission said that the Irish economy - as measured by GDP - will grow by 4% this year before moderating to 3.4% in 2020.

The Commission said that domestic activity is projected to continue growing at a solid pace with robust private consumption growth underpinned by strong growth in employment and wages.

It added that investment in construction is also forecast to expand at a brisk pace.

The Commission noted that the economy maintained its momentum in the first half of 2019, with employment soaring by 3.7% year-on-year and the unemployment rate falling to 5% - a level last seen in 2007.

But it cautioned that the economic outlook remains clouded by uncertainty, particularly due to Brexit and changes in the international taxation environment.

It also said that the "difficult-to-predict activities of multinationals could drive headline growth in either direction".

The Commission also warned that in the absence of major negative external shocks, the risk of overheating could increase in the near term.

"The tight labour market and diminishing spare capacity point to an economy possibly operating above its potential," it said.

"The use of volatile and potentially short-lived foreign-company sourced corporation tax receipts to stimulate domestic demand would also fuel overheating," the Commission added. 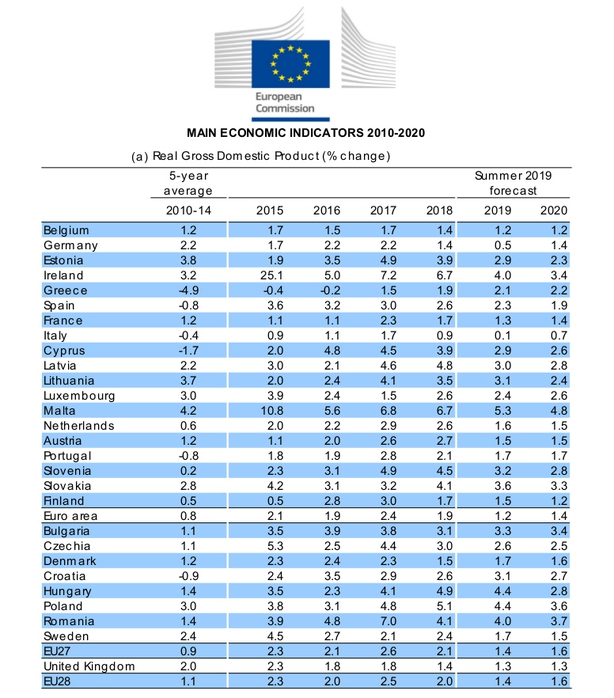 Meanwhile, the European Commission has today lowered its estimates for euro zone growth and inflation, saying uncertainty over US trade policy posed a major risk to the bloc.