Cold and rainy weather hit sales at Primark in May but the fashion retailer's profit margins are still growing, its parent Associated British Foods said today.

The group, which also owns a major sugar business, food brands such as Ovaltine, Ryvita and Twinings, and agriculture and food ingredients businesses maintained its forecasts for its 2018-19 fiscal year.

Shares in AB Foods, which is majority owned by the family of Chief Executive George Weston, rose after the news, extending their gains to 20% this year.

AB Foods said Primark's sales in the 40 weeks to June 22 were 4% ahead of last year on a constant currency basis, driven by new store openings and partially offset by a decline in like-for-like sales.

Primark, which trades as Penneys here, accounts for about half of group revenue and profit.

In the UK, Primark's total sales grew 2.3% in the third quarter and it saw a significant increase in market share.

However, UK like-for-like sales were hurt by unseasonable weather in May which contrasted to last year when Britain enjoyed a heatwave and major events including a royal wedding, which boosted sales.

"May this year was a bit rainy, a bit miserable, a bit damp and a bit cold.

"Put in your mind (last May) that carriage going up the avenue in Windsor with Prince Harry and Meghan Markle and a completely blue sky," AB Foods finance chief John Bason said.

"We've outperformed the market, continued to take share, and importantly I’m not calling a trend here," he said.

Sales at Primark stores in the euro zone were similarly affected by the poor weather in May. 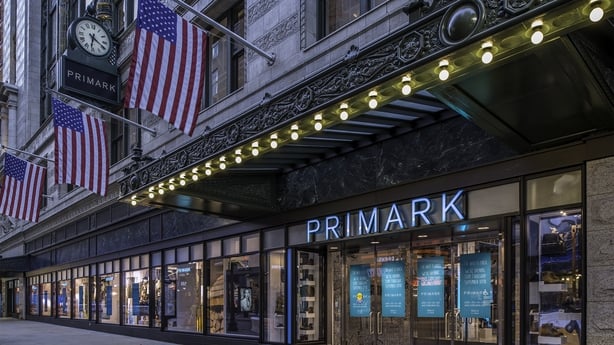 AB Foods said Primark's trading in June had improved in the UK and "recovered strongly" in the euro zone. Sales grew in Spain, Portugal, France and Italy, but trading remained weak in Germany.

In the US, Primark delivered "encouraging" like-for-like and strong total sales growth, the group said.

AB Foods forecast "good profit growth" for Primark in the full year, with a year-on-year increase in margin, thanks to better buying terms and lower markdowns.

Over the 40 week period group revenue rose 3% on a constant currency basis.

AB Foods' overall full-year outlook was unchanged, with adjusted earnings per share expected to be in line with 2017-18's 134.9 pence.

Meanwhile, in the US, Primark continued to deliver encouraging like-for-like and strong total sales growth, the group said.

Over the 40 week period group revenue rose 3% on a constant currency basis.

AB Foods' overall full-year outlook was unchanged, with adjusted earnings per share expected to be in line with 2017-18's 134.9 pence.