The nomination of Christine Lagarde as European Central Bank president has thrust the International Monetary Fund into an early, unanticipated search for a new leader.

This comes amid a raging trade war that has darkened the outlook for global growth.

Christine Lagarde in a brief announcement said she was "honoured" by the nomination and would temporarily relinquish her duties as IMF managing director during the nomination period.

Her appointment is subject to approval by a fractious European Parliament.

If approved, she would take over as ECB president from Mario Draghi on October 31.

Lagarde's second five-year term as IMF managing director is not due to end until July 2021.

Last September, when asked by the Financial Times whether she was interested in the ECB job, she replied, "No, no, no no, no no."

In a statement, the IMF board said it accepted her decision to temporarily step aside and named IMF First Deputy Managing Director David Lipton as the fund's acting chief,  expressing its "full confidence" in the American economist.

The board statement provided no details about the search for a successor to lead the IMF.

But in Washington, speculation about possible candidates was already centering on Europeans that had been viewed as contenders for the ECB job.

Some analysts also suggested that Draghi, who will turn 72 before he leaves the ECB, could be a potential IMF candidate in a sort of job-swap with Lagarde, who is 63.

The IMF has traditionally been run by a European, while the World Bank, its sister institution also created at the end of World War Two, has been run by an American.

At times, larger emerging market countries have sought to disrupt the duopoly with their own candidates.

But Mark Sobel, a former US executive director at the IMF and long-time Treasury official, said he did not see a deviation this time around, especially after US President Donald Trump's nominee to run the World Bank, David Malpass, was approved without a challenge in April.

With 16.5% of the voting power on the IMF board, the US retains an effective veto over IMF decisions.

Given Europe's shrinking influence in the global economy, it may eventually have to relinquish IMF leadership, said Heather Conley, senior vice president for Europe and Eurasia at the Center for Strategic and International Studies in Washington.

"Precedent does carry weight of course, but the lack of IMF institutional reform and the reduction of European GDP to global GDP calls this precedent into question," she said.

US Treasury Secretary Steven Mnuchin has blocked consideration of a reallocation of IMF shareholdings that would increase funding and give more influence to large emerging market countries such as China, Brazil and India.

Christine Lagarde's departure would deprive the IMF of a tireless advocate for the benefits of trade, global growth that aids the poor and middle classes, and the empowerment of women.

She has spent much of this year warning about slowing global growth caused by the US-China tariff war, which the IMF estimates would cut global economic output by 0.5%.

The pending appointment of Christine Lagarde as ECB President is to be taken positively by financial markets, according to Ronan Costello, Head of Euro Money Markets at Bank of Ireland Markets & Treasury. 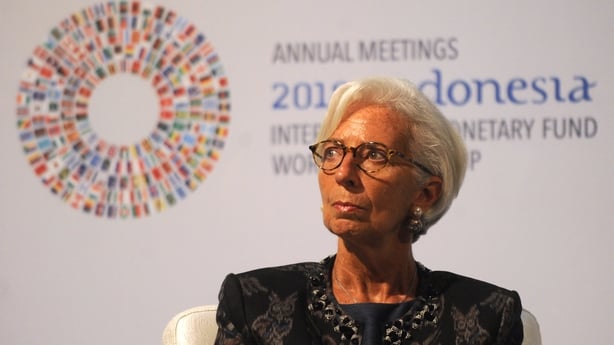 Ronan Costello said that although Ms Lagarde lacks previous central bank experience, her reputation as a progressive leader has grown since she left the French Finance Ministry to become Head of the International Monetary Fund (IMF).

He said that Ms Lagarde played a pivotal role in helping steer the Troika through the European debt crisis and has been supportive of the ECB's balance sheet expansion and its use of negative rates.

While Christine Lagarde is a lawyer and not an economist, Mr Costello said the combination of her as ECB President and Philip Lane as ECB Chief Economist is a strong one.

"Lane will be tasked with designing and proposing the appropriate monetary solutions and Lagarde with her exceptional communication and diplomacy skills should be able to garner consensus across the 25 member Governing Council," he said.

"Markets will watch closely for any indications of policy changes at the ECB, and this transition period is likely to see further volatility in European interest rate markets and for the single currency," he added.