The NTMA has also warned that investors remain concerned about Brexit, potential changes to the global Corporation Tax regime and the economic situation in Italy.

The agency made the comments at the launch of its annual report for 2018 and midyear update for 2019.

It said the favourable yield environment is contributing to significant reductions in the amount of interest that the state is having to pay on its national debt.

As a result, the cost of servicing that debt is due to drop to €5 billion this year, and further decrease to €4.5 billion next year.

This means that the state will be paying €3 billion less per year on its debt compared to 2014.

The threat posed by so-called "debt chimneys" - periods where debt refinancing requirements for the state are particular high - during the 2018-2020 has also receded, according to the NTMA.

This follows the successful refinancing of a large portion of the €60 billion in debt that had fallen due for repayment.

It says that when the last of the chimneys is eliminated next year, the profile for debt repayment into the future will be as smooth as any time in the state's history.

The refinancing had fallen due at a fortunate time for Ireland, NTMA chief executive Conor O'Kelly said, with ECB President Mario Draghi's policies driving borrowing rates to an historic low.

However, that policy will not remain forever, the agency warned, and as a result Ireland could be exposed in the medium term as rates rise again.

Mr O'Kelly also said the national debt of €200 billion remains largely unchanged and is expected to stay at that level for the foreseeable future.

He described it as a mountain of debt and said the best way to get down a mountain is slowly, by sticking to the path and by not taking alternative routes or going back up the mountain.

Another vulnerability for Ireland, he added, is that the country depends on overseas investors for 90% of its borrowings, which leaves the state open to quickly changing costs.

In summary, he said, when you are highly indebted, the single best way to mitigate against future downturns is to pay down debt. 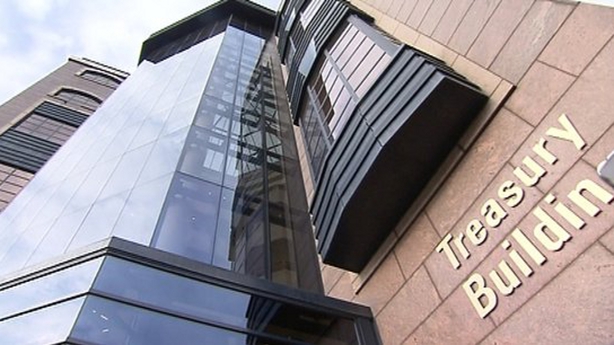 The European Commission ruled in August 2016 that Apple had received unfair tax incentives from Ireland.

Both Apple and Dublin are appealing the ruling, saying the iPhone maker's tax treatment was in line with Irish and European Union law.

But Ireland had to fully recover the €13.1 billion plus interest of €1.2 billion, pending the appeal that will take several years.

It will hold the funds in an escrow fund whose aim, the report said, was preserving capital to the greatest extent possible given prevailing market conditions.

Mr O'Kelly said the Irish Strategic Investment Fund had a strong first half in 2019, recouping all the losses the previous year when Irish and global markets experienced a rout.

€850 million had been added to it since its inception, Conor O’Kelly said, and it had realised an annual return of 2.3%, although it experienced a 1% drop in value in 2018.

He said the biggest issue for the National Development Finance Agency (NDFA) had been the liquidation of one of the UK’s largest construction management companies, Carillion, which had been involved in a public-private partnership (PPP) school building project involving six schools here.

But despite the company’s collapse, the NDFA had managed to ensure the completion of the schools, without any extra cost to the taxpayer, proving the PPP model "stood the test", Mr O’Kelly added.

"It was the ultimate stress test if you like of the PPP model, the PPP contract," he claimed.

"Four of those schools have now been delivered, the other two will be delivered in September, albeit the first few a year late and the second ones two years late."

10,000 claims worth a total value €3.5 billion were managed by the State Claims Agency, with 80% of those claims clinical in nature.

"I think it would remiss of me not to say that although the State Claims Agency has been dealing with catastrophic injuries and very difficult cases for a very long time, nothing compares to the cases we have had to deal with in 2018 in terms of cervical cancer...the devastating impact on the women involved," Mr O’Kelly said.

Speaking at the launch of the NTMA report, the Minister for Finance said the agency has played "a vital role in not only Ireland's recovery from the financial crisis but also in building our resilience to withstand future shocks".