New figures from the Central Statistics Office show that median gross income for households stood at €45,256 in  2016.

Meanwhile, households in Malahide had the highest median income of €78,631 of all 41 towns in Ireland with a population of 10,000 or over.

The CSO noted that in 26.6% of households, social welfare payments made up more than half of the income.

Today's CSO report also found that household incomes are impacted by factors such as gender, general health, education and the place and type of work undertaken. 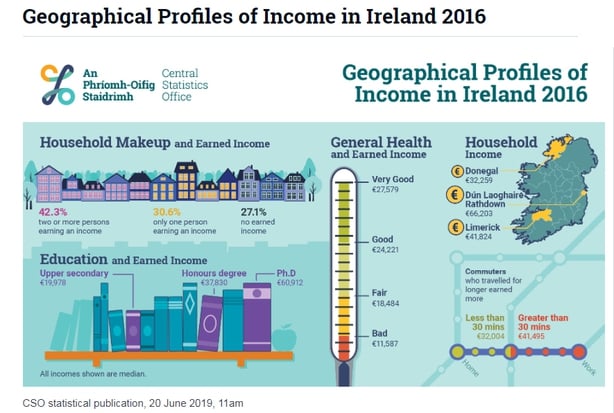 Included in the findings from the CSO's Geographical Profiles of Income in Ireland figures is the fact that the highest median earned income in 2016 was for the ICT, Scientific & Recreation sectors at €37,037.

The CSO also noted that about four euro in every ten earned by residents of Sligo, Leitrim and Donegal came from the Public Service, Education and Health sector.

It also found that households who were owner occupiers with a mortgage had the highest median income at €68,149 in 2016.

And owner occupiers, where the house is owned outright, had a median income of €37,733. Most pensioners fall into this category, the CSO said.

Meanwhile, average rents made up more than 33% of household disposable income for tenants in South Dublin, the highest proportion in the country.

The lowest was 21.1% in Longford and compares to the state average of 29.