Residential property price growth showed signs of stabilising in March, as prices rose by 3.9% year-on-year compared to 4.3% a month earlier.

The Central Statistics Office said this compares with an increase of 12.6% the same time last year, while it also marked the lowest rate of price growth since the recovery in prices began in 2013.

On a monthly basis, property prices rose by 0.2% in March compared to February -  the first monthly increase since October last year.

The figures show that Dublin residential property prices rose by 1.2% in the year to March, with house prices rising by 0.7% and apartments by 2.5%.

It noted that the highest house price growth in Dublin was in South Dublin at 3.4%, while the lowest growth was in Dun Laoghaire-Rathdown at 0.4%.

Meanwhile, residential property prices in the rest of the country increased by 6.8% in the year to March, with house prices up by 6.7% and apartments rising by 8.6%.

The region outside of Dublin with the biggest rise in property prices was the Mid-West at 11.9%, while the smallest increase was seen in the Mid-East at 1.6%.

The CSO said that property prices nationally have increased by 81.6% from their trough in early 2013.

Today's figures show that the mean, or average, price for a home stood at €292,115 in the year to March.

The mean price in Dublin at €445,051 was the highest in any region or county.

Dún Laoghaire-Rathdown had the highest mean price in the Dublin region at €625,024, while South Dublin had the lowest at €362,825.

Outside of Dublin, the Mid-East was the most expensive region, with a mean price of €291,698. 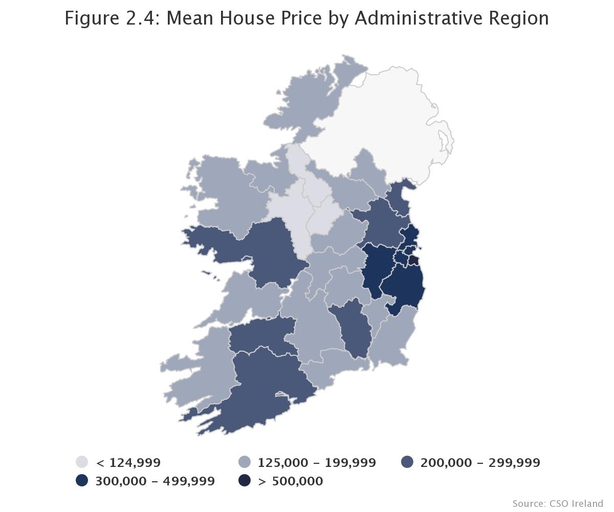 Meanwhile, Longford was the least expensive county with a mean price of €112,340 for a home in March.

Today's CSO figures also show that 44,458 household dwelling purchases were filed with Revenue in the year to March.

These purchases were composed of 291 new homes and 673 existing homes. 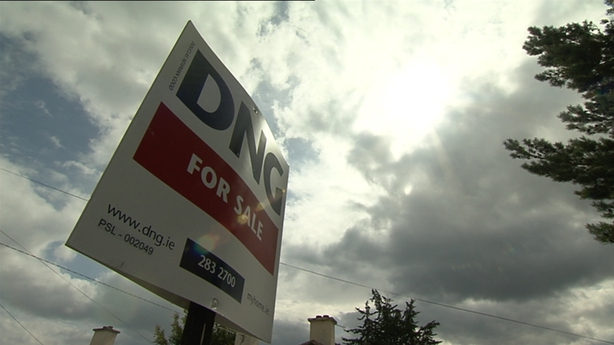 Commenting on today's figures, Goodbody economist Dermot O'Leary said that it is worth noting that the CSO calculates the price index on the basis of stamp duty returns.

These are completed at the end of the sales process and thus there may be a lag with what is happening on the ground.

"That said, reports such as those from Daft.ie do not suggest any great change in recent months," he said.

Mr O'Leary said the increase in the stock for sale suggests that prices may remain flat over the coming period.

"Macroprudential mortgage rules are also acting as a binding constraint to significant price growth. These issues can have an impact in the short-term, but there still remains a significant gap between housing demand and supply, thus upward pressure on prices and rents will remain in our view over the medium-term," the economist added.

Pat Davitt, Chief Executive of the Institute of Professional Auctioneers and Valuers, said the continuing slowing in the rate of increase denotes some realism returning to the market following a period of exuberant growth.

But he added that prices in areas of the country such as the mid-West are still below a price that would induce builders to build.

"Over 82pc of the houses purchased according to today’s report are existing dwellings, pointing to the difficulty with building new homes," he said.

And he said even if prices in the regions were to rise to a level close to the cost of building there is still an issue with building finance.