Passengers using Dublin Airport should expect to see their air fares fall over the coming years, according to the aviation regulator, after it put forward proposals to reduce what the airport can charge airlines.

If confirmed following a period of consultation, the cost per passenger will drop by 15% from a maximum of €8.81 this year, to €7.50 over each of the next five years, the Commission for Aviation Regulation (CAR) said.

Commissioner Cathy Mannion said she expects that the cost reduction will be passed on to customers by airlines using the airport, because of the level of competition in the market.

However the DAA has strongly disputed this, and said there is no evidence whatsoever that any reduction in charges at Dublin Airport will be passed onto consumers in the form of lower airline ticket prices.

The CAR decision is likely to cast doubt over the DAA's €1.8bn capital investment plan for the airport though, because it will result in lower revenues for it over the next five years.

Reacting to the news, the DAA said it is extremely concerned by the price proposals, which it described as fundamentally flawed, unjustified and risks stagnation at Dublin Airport.

It said the reduction in charges is more in the order of 22% when compared to last year’s rates and does not take account of the current reality at the airport.

It also warned that the move, if confirmed, would jeopardise its investments in new facilities required to cope with growing demand.

However the CAR said it thinks the DAA plans remain viable, even though the airport operator had sought a price range of €9.05-9.94 per passenger.

The regulator said it supports the airport’s expansion plans, which it sees as being in the interests of passengers, and praised the consultation the airport carried out with its stakeholders.

But it thinks they can be delivered 8% more efficiently than set out by the DAA through more prudent expenditure on aspects of the 120 proposed developments.

The regulator accepts that the existing infrastructure at the capital’s airport has reached capacity.

The airport’s plans include an extension of the US pre-clearance area and an increase in the number of boarding gates, stands and taxi-ways for Terminal 2.

It also includes the extension of a pier at Terminal 1 and new stands and taxiways to the north of the airport buildings.

An underpass opening up the western side of the airport is also in the five year proposals.

Dublin Airport is also building a third runway, which is due to be operational by 2022, but this formed part of a separate capital plan previously approved by the CAR. 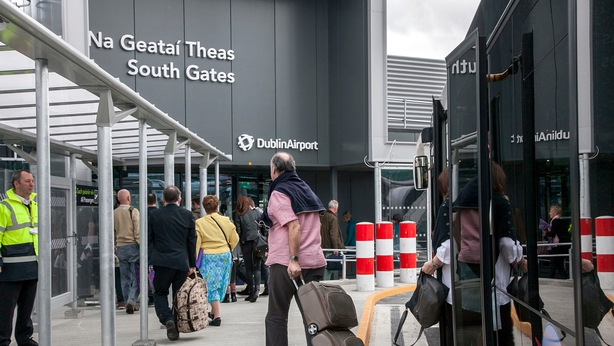 DAA CEO Dalton Philips said the CAR's proposal was "flawed" and "absolutely not in the best interests of passengers, airlines or the wider Irish economy."

"The most pressing issue at Dublin Airport isn’t our charges, which are already low, it’s about investing for Ireland’s long-term future and CAR’s proposal won’t allow us to do that," he said.

The DAA said it would make a formal submission to the aviation regulator over the coming months to challenge what it described as the "flaws" and "incorrect assumptions".

It added that the airport is already an efficient operation and has charges that are 30-40% cheaper than its European peers.

"Investment in new facilities is what our airlines want, what our passengers are demanding and what is urgently required by the Irish economy," Mr Philips said.

"There is no point in CAR saying that it approves all of the projects in our capital investment programme, while simultaneously refusing to properly fund the investment."

In its decision the CAR said it carried out a line-by-line assessment of the Dublin Airport plans, including the proposed rates for the work, before reaching its draft decision.

It also looked at the airport’s operating costs, depreciation, the cost of capital and commercial revenues the facility generates from ares including retail and car parking.

Since it last made a determination on price five years ago, the CAR said there have been a number of changes that suggest prices should fall.

These include that passenger numbers are much higher and will continue to grow by an estimated 3% a year up to 2024, by when they will reach an estimated 37.8 million.

Retail revenues are also much higher than forecast five years ago, it said, and the cost of capital has fallen.

However, offsetting these gains, it added, are higher operating costs at the airport, the capital investment plan and a possible increase in inflation.

In a statement, Ryanair said the proposed reduction in charges at Dublin airport was welcome but does not go far enough.

"In the past 5 years traffic through Dublin airport has grown by 40%...and as a result the charges need to be reduced by more than the proposed 15%," it said.

It also called for a third competing terminal at Dublin which would it said would remove the need for a cap on airport charges.

Aer Lingus said it noted the draft determination and would participate in the CAR’s consultation process.

Interested parties will have two months to submit observations to the proposals published today and a final decision will be made by the regulator’s office in September, with the new charging regime coming into force from January 1st.