The CEO of AIB has said he will be meeting the leadership of the Irish Farmers Association in the coming days to discuss the sale of farming loans as part of a recent wider loan disposal.

Project Beech involved the sale of over 2,200 non performing loans, 95% of which the banks says are in arrears of over 2 years.

The majority of the loans, which were sold to a consortium including the so-called vulture fund Cerberus for around €1 billion, were on buy to let and investment properties, but the bank said some farm loans were included.

The IFA mounted a protest outside the bank's AGM in Ballsbridge today which, for a time, involved blocking the entrance to the conference venue with a tractor.

A large group of farmers and members of the IFA marched outside the venue with posters and banners calling on the bank to reverse its decision.

Martin Stapleton, Chairman of the Farm Business Committee of the IFA, said there was no consistency in the way the bank had approached the issue and accused AIB of 'superficial engagement' with those affected.

"It is completely unacceptable that they would sell the loans of farmers who've been genuinely making every effort to engage and pay.

"It's all about giving people the opportunity to pay back a bank that has been bailed out by the people who they now won't give that opportunity to."

Richard Kennedy, Deputy President of the IFA said the association was not representing individuals who were refusing to pay their loans.

"This is the beginning of a campaign. We will to continue to make this point all over the country until AIB is prepared to stop the sale of loans of genuine farmers."

Speaking to media inside the AGM, AIB CEO Colin Hunt said the bank wanted to engage with customers and to have them continue banking with them.

"We have the largest array of options for dealing with issues of non-performing loans of any bank, but we have to retain the right to engage a range of options to deal with NPEs (non-performing exposures) to ensure that we're strongly positioned for the years ahead.

"We want to see engagement and conversations where we can come to agreements that lead to viable restructuring of NPEs." 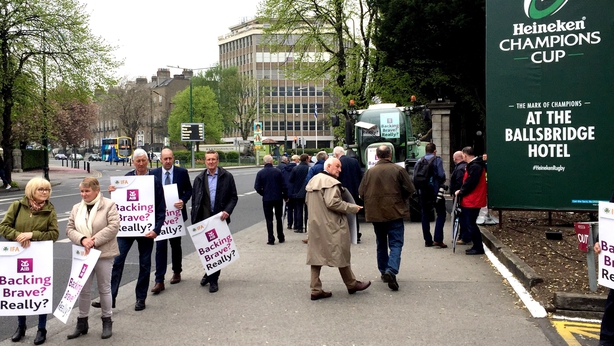 On claims that the bank was refusing to engage with the farmers, Mr Hunt said AIB had over 1,500 staff out of a total of around 10,000 engaged in coming up with solutions for individuals who were having difficulties paying back their loans.

He said this amounted to a huge investment in terms of personnel.

Farmers protest inside the Ballsbridge Hotel at the AIB AGM pic.twitter.com/Ryb7oIaHot

Meanwhile, the deputy chair of AIB has indicated that remuneration is an issue for the bank in the retention of staff.

In her opening comments at AGM, Catherine Woods said the restrictions on pay in state-owned banks remains a real concern for institutional investors.

She said the bank was awaiting the conclusion of a remuneration review announced by the Minister for Finance.

Minister Paschal Donohoe announced the review around the time that the state - which is a 71% shareholder in AIB - voted against proposals from the bank last year around share based remuneration.

"Our ability to retain and attract the people with the skills necessary to maximise the value of the bank for all shareholders, including the Irish taxpayer, is in part dependent on our ability to compete with the remuneration practices of other employers," Ms Woods said.

Colin Hunt also said the bank was "comfortable with the position"’ it's in regarding 6,000 customers who believe they have been left outside the tracker redress programme.

He told the AGM that it had dealt with the cases.

The customers were given €1,650 each in recognition of the fact that they were denied a tracker in 2008 when their fixed rate period expired.

However, the bank argues they were never on tracker mortgages in the first place.

AIB said it had finished offering trackers as a product by the time the customers came off their fixed rate products.

It claimed the "prevailing tracker rate" would have been prohibitively high had it been offered as a product at the time.

Consumer advocate Brendan Burgess accused the bank of being creative in its use of language on the issue.

He said the bottom line was that these customers were entitled to a tracker rate.

Mr Burgess claimed the affected individuals were paying on average €250 per month more than they should be paying if they were on a tracker.