A total of 36.5 million passengers passed through the main Irish airports last year, an increase of 6.1% over the previous year.

But passenger numbers decreased in airports in Connemara in Galway and Inishmore in Donegal.

Meanwhile, over 8.4 million passengers passed through the main Irish airports in the fourth quarter of last year, an increase of 6.9% over the same time in 2017. 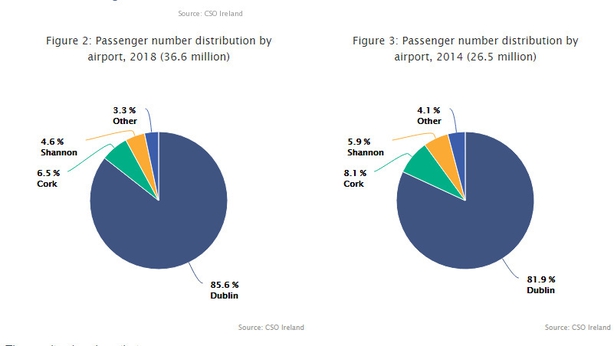 Today's CSO figures show that more than 266,000 flights were handled by the main airports in 2018 with Dublin accounting for 83.6% of all flights, while Cork handled 7.7% of all flights.

London-Heathrow and London-Gatwick were the most popular routes for passengers for Dublin airport in 2018.

For Cork airport, London-Heathrow and London-Stansted were the most popular routes.

The main Irish airports also handled a total of 157,364 tonnes of freight in 2018, the vast majority (93.6%) of which was international freight.