New figures from the Central Statistics Office show that the unemployment rate fell to an 11-year low of 5.4% in March from a rate of 5.6% in February.

The CSO said the seasonally adjusted number of people who were unemployed stood at 131,300 in March, a decrease of 6,200 when compared to March last year.

Today's figures show that the unemployment rate for men was 5.4% in March, down from 5.9% the same month last year, while the the jobless rate for women was 5.5% - down from 5.7% last year.

Meanwhile, the seasonally adjusted youth unemployment rate was 13.4% last month, a decrease from 13.8% in February.

The jobless rate has fallen from a financial crisis-peak of 16% in 2012, when the country was midway through a three-year international bailout.

It had provisionally dropped as low as 5.1% last year but the series has since been subject to a series of quarterly revisions by the CSO.

The unemployment rate is now almost two-and-a-half percentage points below the current euro zone average of 7.8%.

Employment increased in 10 of the 14 economic sectors over the year in the fourth quarter of 2018.

The largest rates of increase were recorded in the administration and support service activities with employment levels rising by 12.6%, while numbers employed in construction rose by 7.9%.

Commenting on today's figures, Pawel Adrjan, economist at global job site Indeed, said the trend in unemployment is continuing on its downward trajectory and means that employers are going to find it increasingly challenging to recruit talent.

"The country is also drawing on inward migration to fulfill open roles with 57% of employment growth in the past year coming from non-Irish nationals, and nearly half of that coming from outside the EU," the economist said.

A review of the top 10 jobs searched for by non-EU nationals on Indeed looking to come to Ireland shows a strong interest in opportunities in the technology sector.

Tech roles accounted for six out of the ten most popular jobs, with positions for civil engineers and doctors also making the list.

"If the trend in unemployment continues then inward migration will become an increasingly important source of talent to supplement the domestic labour supply," Mr Adrjan said. 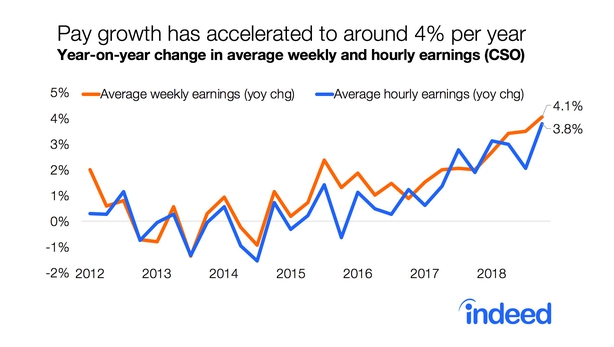 He also noted that low unemployment and high demand from employers for staff is helping support solid growth in pay. Pay growth has now accelerated to around 4% a year.