House prices are still rising, but they are doing so at a slower rate, according to a new report from property website Myhome.ie.

The Myhome.ie report showed that the trend of downward house price inflation - first noticeable in the second half of 2018 - has continued in the first quarter of 2019.

The report, which is published in association with Davy, found that annual asking price inflation is now just 3.3% nationally and 1.1% in Dublin. This is down from 6% and 3% respectively in the fourth quarter of 2018.

Asking prices for newly listed properties nationally increased by 2% in the first quarter of the year, while they rose by 1.4% in Dublin.

Conall MacCoille, chief economist at Davy, said the slowdown in price inflation, which was concentrated in Dublin, was largely due to the Central Bank's lending rules and unrealistic price expectations rather than uncertainties caused by Brexit.

"At the beginning of 2018, the median loan-to-income (LTI) ratio among first-time buyers in the capital was already 3.5 times income and therefore close to the regulatory threshold," he said.

"The tightening of the Central Bank of Ireland mortgage lending rules - and the resulting slowdown in price inflation - was always going to be felt first in the capital," the economist stated.

"It also appears that price expectations in early 2018 were unrealistic and a period of adjustment has taken place as a result," he added.

The report's analysis also showed that the slowdown has been concentrated in the most expensive property types and areas.

It said the median asking price for four-bedroom detached houses in Dublin is flat on the year at €650,000. 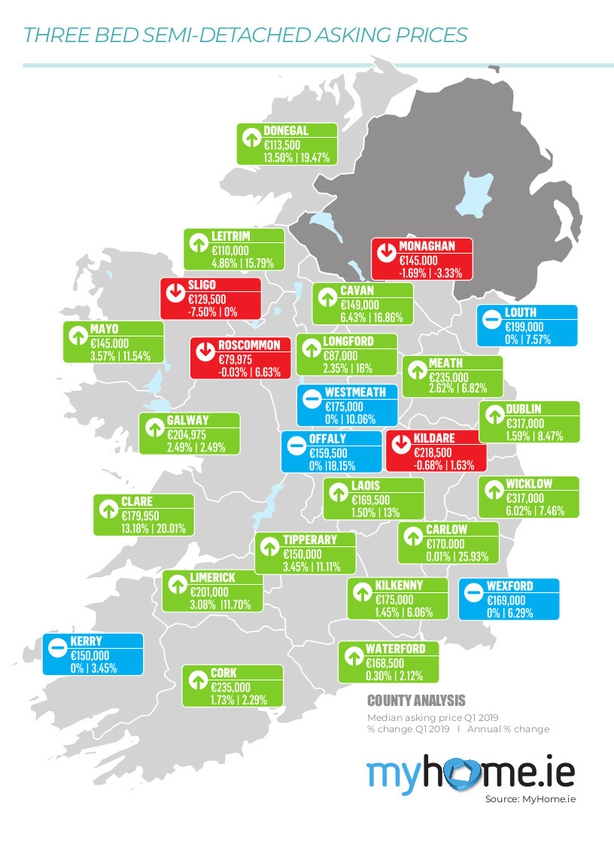 "Despite the current slowdown, we still expect Irish house prices nationally to rise by 4% in 2019", Mr MacCoille said.

The report also noted that there are few signs yet that Brexit is holding back transactional activity.

Residential transactions grew by 4% in 2018 to 57,000 and the report estimated that volumes in January and February were also up 4% on the same period last year.