UK employers increased their hiring at the fastest pace in more than three years in the three months to January as the country's labour market defied the broader weakness in the overall economy as Brexit approached.

The number of people in work surged by 222,000, helping to push down the unemployment rate to 3.9%, its lowest since the start of 1975, official data showed.

A Reuters poll of economists had pointed to a rise in employment of 120,000.

With the terms of Britain's exit from the European Union still unclear, many businesses have cut long-term investment in equipment, potentially making them more likely to hire workers who can be sacked if the economy sours.

The strength of the labour market is pushing up wages more quickly.

Total earnings, including bonuses, rose by an annual 3.4% in the three months to January, the Office for National Statistics said, stronger than a median forecast of 3.2% in the Reuters poll. 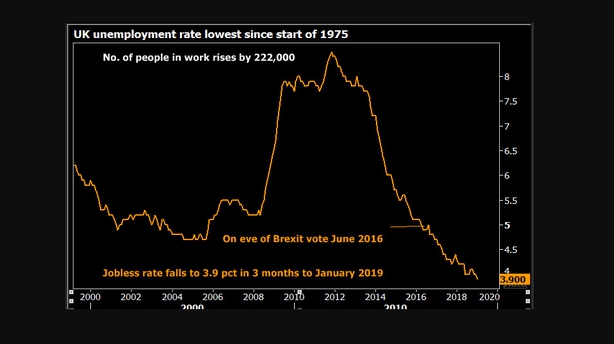 Wage growth for the three months to December was revised up slightly to 3.5%, its highest since the middle of 2008.

Average weekly earnings, excluding bonuses, also rose by 3.4% on the year, in line with the Reuters poll.