The pace of growth in residential property prices slowed again in January, new figures from the Central Statistics Office show.

Property prices increased by 5.6% nationally in the year to January - the slowest pace of growth since June 2016.

This compared with an increase of 6.4% in the year to December and a rise of 11.8% the same time last year.

On a monthly basis, the CSO said that property prices eased by 0.4% in January.

Today's figures show that Dublin residential property prices rose by 1.9% in the year to January with house prices rising by 2.3% and apartments by 1.6%.

The CSO noted that the highest house price growth in Dublin was in South Dublin at 4%, while the lowest growth was in Fingal at 2.6%.

Meanwhile, residential property prices in the rest of the country rose by 9.5% in the year to January, with house prices up by 8.5% and apartments up by 18.6%.

The region which saw the largest rise in property prices was the Mid-West with growth of 16.5%. The smallest rise was recorded in the Mid-East region with growth of 5.1%.

The CSO said that property prices nationally have increased by 82.1% from their trough in early 2013. 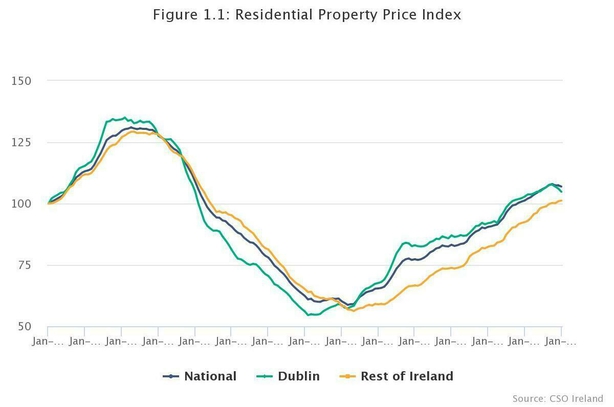 The mean price in Dublin at €447,028 was the highest in any region or county.

Outside of Dublin, the Mid-East was the most expensive region, with a mean price of €292,172.

Longford was the least expensive county, with a mean price of €107,950.