Dublin has entered the top five most expensive locations in Europe for rental accommodation for the first time, new research shows.

Dublin has become more expensive to rent in than cities like Paris, Copenhagen and Stockholm.

The research from global mobility expert, ECA International, reveals the average rental price for an unfurnished, mid-range, three-bedroom apartment in Dublin has risen to €3,406 a month.

ECA International said that the past decade has seen a significant turnaround in the fortunes of Dublin's residential rental market.

"The global financial crisis exposed a property bubble in the Irish capital and rents have increased significantly with each subsequent year of recovery," said Alec Smith, Accommodation Services Manager at ECA International. 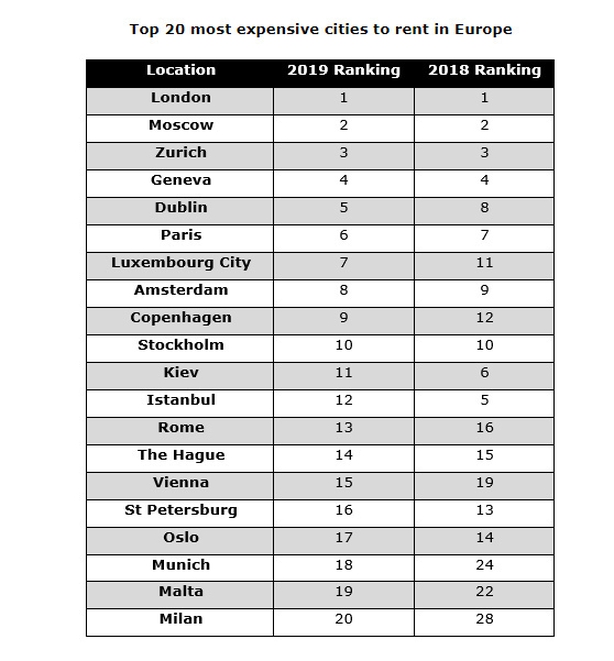 "The cost of renting has also been affected by elevated demand from international companies relocating staff while looking to take advantage of Ireland’s low corporate tax rate," Mr Smith added.

London remains the most expensive city for rental accommodation in Europe, but the latest research shows that Dublin has jumped 35 places to 26th in the global rankings.

ECA said that rental costs across Europe rose significantly last year, partly due to the strength of the euro.

While Dublin saw the biggest rises in expatriate rental costs in Europe, major cities such as Madrid, Rome, Paris and Barcelona all saw increases over €120 a month.

Meanwhile, Hong Kong remains the most expensive location in the world for expatriate rent, with typical expat accommodation averaging $10,929 a month, a rise of 4.9% from last year.

New York remains the second most expensive city in the world for overseas workers to rent in, and by far the most expensive location in the Americas.

However, rental costs have dropped by over $250 since last year, as demand dropped slightly.