The wife of sacked Nissan chairman Carlos Ghosn has urged New York-based Human Rights Watch to draw attention to his "harsh treatment" during detention in a Japanese jail.

This is according to a letter seen by Reuters over the weekend.

Japanese authorities have charged Ghosn with under-reporting income and aggravated breach of trust for temporarily transferring personal investment losses to Nissan in 2008.

In a nine-page letter to Kanae Doi, the rights group's Japan director, Carole Ghosn asked it to "shine a light on the harsh treatment of my husband and the human rights-related inequities inflicted upon him by the Japanese justice system".

Ghosn was in charge of an alliance that included Nissan, Mitsubishi and France's Renault until his November arrest and his removal as chairman of the automakers sent shockwaves through the industry.

The government has denied requests to end his detention, which has run since November 19.

Ghosn's lawyers have said it would probably take more than six months for his case to come to trial.

"He is treated under the appropriate procedure, assuring fundamental human rights of individuals and undergoing strict judicial examination in according with relevant domestic laws of Japan," a ministry spokesperson said.

Nissan said it was not in a position to comment on the workings of the judicial system, or any decision by the Tokyo prosecutors' office.

"Ghosn has not, and should not, receive preferential treatment," Adams wrote in the editorial, which appeared in the online edition of "The Diplomat".

"But if Japan wants to live up to its reputation as one of the world's most advanced democracies, it needs to modernise its criminal justice system," he added.

"Regardless of the serious allegations against him, or the controversies surrounding his tenure at Nissan, no one should have their rights violated in this way while facing criminal charges," he said.

Nissan said last Friday it had filed a criminal complaint against Ghosn with Tokyo prosecutors related to the misuse of a "significant amount of the company's funds".

The former Nissan executive is being held in a 75 square foot unheated cell and being denied daily medication, his wife said in her letter.

He has lost 7kg (15 pounds) since being detained and eats only rice and barley, she added.

Prosecutors in Japan often try to extract confessions from prisoners in detainment that could last months, Carole Ghosn said in the letter.

"For hours each day, the prosecutors interrogate him, browbeat him, lecture him and berate him, outside the presence of his attorneys, in an effort to extract a confession," she said.

"No one should be forced to endure what my husband faces every day, particularly in a developed nation like Japan, the third largest economy in the world," she added. 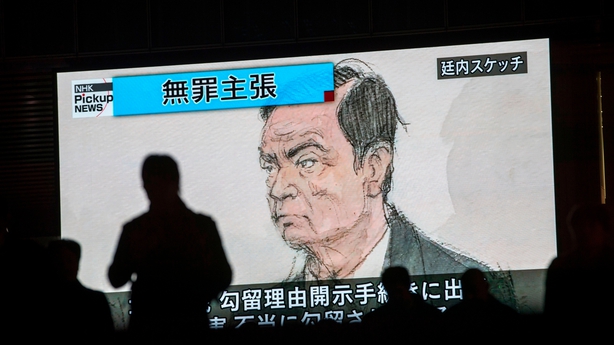 Ghosn said he was "wrongly accused and unfairly detained based on meritless and unsubstantiated accusations" during a Tokyo court proceeding last week, his first public appearance since his November arrest, at which he seemed noticeably thinner.