Marks & Spencer suffered another quarter of falling underlying sales in both clothing and food, underscoring its long and uncertain road to recovery.

The 135-year-old retail chain said today that same-store clothing and homewares sales fell 2.4% in the 13 weeks to December 29, its fiscal third quarter.

That compared with analysts' mean forecast for a fall of 1.6% and a second quarter drop of 1.6%.

Same-store food sales fell 2.1% compared to analysts' consensus forecast of a fall of 2.5%t and a 2.7% drop fall in the previous quarter.

Marks & Spencer, which has been struggling for years with competition from fast-food, online and discount rivals, said its full-year guidance was unchanged.

"Against the backdrop of well publicised difficult market conditions our performance remained steady across the period," chief executive Steve Rowe said in a statement.

UK's retail stocks have been rattled by signs of a slowdown in spending amid uncertainty whether the country will manage an orderly withdrawal from the European Union in less than three months' time. 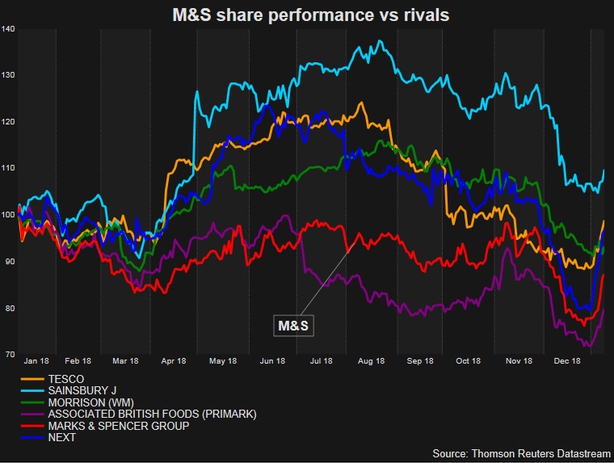 After over a decade of failed turnaround plans, M&S is now targeting sustainable, profitable growth in three to five years by shutting weaker stores, re-shaping its clothing and food businesses, cutting costs and investing in technology.

It warned in November sales were unlikely to improve any time soon.