New figures from property consultants CBRE Ireland show that a total of 34 hotel deals - worth more than €730m - were competed during 2018.

CBRE Ireland said the total for 2018 was considerably higher than the volume of sales completed in 2017. 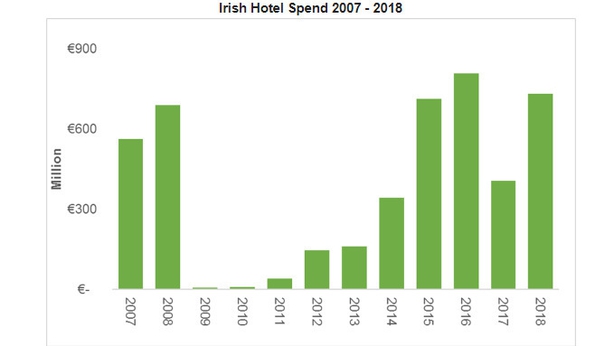 Hotels that changed hands during the year included The Heritage Hotel & Spa in Killenard in Co Laois and the Connemara Coast Hotel in Furbo in Co Galway.

Marie Hunt, executive director and head of research at CBRE Ireland that 2018 was a very positive trading year for Irish hoteliers.

"Interestingly, while the number of UK visitor numbers was down year-on-year, this was more than compensated for by visitors from other jurisdictions on the back of increased marketing efforts from bodies such as Tourism Ireland and Fáilte Ireland," she added.