Brexit, financial market volatility and house price growth are among the most significant risks facing the Irish economy, a new analysis by the Central Bank has found.

The bank's second Macro-Financial Review of 2018 also points to the possibility of the Irish economy operating above its productive capacity as another possible threat to its underlying health.

The overview examines the financial environment here and analyses the potential risks to the economic and financial systems.

It says the economy continues to expand at a strong pace, with domestic demand, employment growth, underlying investment and exports among the main drivers. 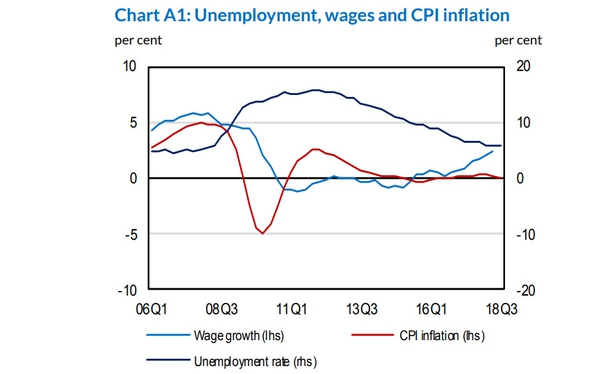 But it also says the labour market is tightening and wage growth has been rising.

Infrastructure shortages, particularly housing, are also apparent and present a threat to the economy in the coming years.

As a result, it warns that policy actions should not be adopted that would further amplify economic growth.

"It is important that households, banks and the financial system are building resilience," Sharon Donnery, the Central Banking's deputy Governor said.

"For our part, this includes reinforcing our well-established mortgage measures andrequiring banks to hold sufficient capital so they can better weather any difficult times ahead," Ms Donnery said.

These include imposition of trade barriers, vulnerabilities in emerging markets from high debt and US dollar appreciation, as well as the possibility of a hard Brexit.

In that regard it finds that a further weakening of the value of sterling would make trade even more difficult for the 7,000 Irish exporters selling goods and services into Britain, by causing them to become more expensive.

The review also highlights that if Britain crashes out of the EU without a deal at the end of March, a drop in the value of the British currency could also be accompanied by an increase in tariffs on exports.

Sectors including agri-food and wholesale-and-retail are among those more exposed to the effects of Brexit, the report says, while UK focused regions including the border counties are more vulnerable.

Brexit could also disrupt the activities of the 26,000 firms reliant on imports from the UK, the analysis states.

But currency movements are not the only potential challenge caused by a disorderly Brexit, the bank states, with property also exposed. 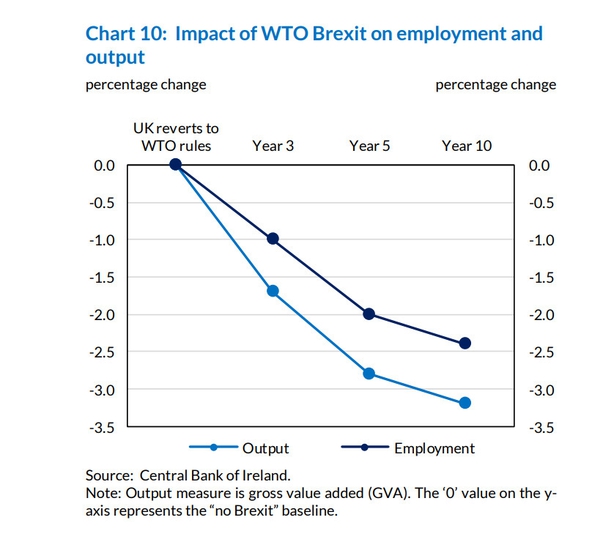 UK based borrowers represent over a quarter of the exposure of Irish banks' property loans books and so an economic jolt following Brexit could reduce their profitability and impact the quality of their loan portfolios.

As a result, building resilience in the banks and the financial system is the Central Bank's key focus it says.

It also points to possible problems faced by Irish banks and life-assurance firms in writing new loans and policies in Britain if a disorderly Brexit takes place.

"While we might all hoped for the best, we have to plan for the worst".

Other potential non-Brexit risks identified include worries about the potential of capacity constraints emerging as the economy grows rapidly.

It also warns that if house prices rose to or above levels consistent with broader economic developments, it could pose a threat to economy.

According to the Central Bank, a correction in asset prices and reversal of investor sentiment in financial markets is also a possible threat that has risen since the last review was published.

Similarly, a rise in market volatility as a consequence of protectionism, changes in corporation tax and other European and global geopolitical changes could also pose a risk, the bank says.

The bank also reiterates its view that it is important that fiscal buffers are built up in good times to address any adverse shocks to the state and to the economy more generally that may arise.