Danish insurer Qudos, which has around 50,000 Irish-based customers, has said it will not be paying out on any claims at present as the company has gone into liquidation.

Qudos, which filed for liquidation in Denmark on 27 November, would mostly have sold motor insurance policies to customers here via agents and brokers.

Although the company said its insurance policies are still valid, it will not pay out on any claims "at the moment" and expects to give more detail on the payment of outstanding claims within the next two weeks.

The Central Bank has said it "strongly recommends, based on the uncertainty around the payment of claims, that affected customers contact their insurance broker to arrange alternative insurance cover".

Qudos is authorised by the Danish Financial Supervisory Authority and operates in Ireland on a freedom of services basis.

The CEO of Insurance Ireland has said that the Danish insurance regulator has questions to answer because it was their responsibility to make sure that Qudos had enough money to pay claims.

Kevin Thompson said that there is a lack of clarity as to why Qudos has gone into liquidation, adding there is now a risk that "there isn’t enough money in the pot to pay liabilities".

He said the closure will mostly affect people with motor insurance policies, but the company also provided cover for a small number of household policies.

Mr Thompson urged affected customers to contact their broker, but said there may be an administration fee charged by brokers for moving the policies from Qudos to another insurer.

Consumers can also check whether or not they have a policy underwritten by Qudos by checking their policy documentation, or in the case of motor policies, checking their insurance disc.

Qudos has been operating in Ireland since 2013. 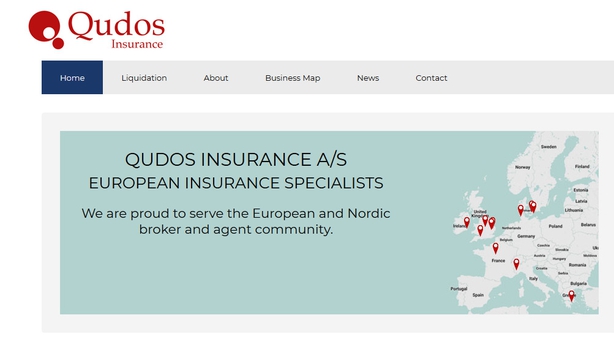 If the Qudos liquidator decides the company does not have enough funds to meet outstanding claims, a decision will then have to be made about whether liability rests with Danish or Irish insurance compensation funds.

In a statement, Brokers Ireland said it is closely monitoring the situation in relation to Qudos.

"The organisation is urging all affected customers to heed the advice issued by the Central Bank to contact their insurance Broker to arrange alternative insurance cover," it said.

The organisation said it is again calling on European regulators to ensure that cross border rules governing passporting are sufficiently robust to prevent consumers being exposed to being left without insurance cover.

According to Patrona Underwriting, the managing general agent for Qudos in Ireland, the insurance company has around 1,500 outstanding claims from its 50,000 customers here.

CEO Tony Wright said there would be no administration fees charged on customers moving policies from Qudos to another insurer, unless brokers impose them.

He said brokers have begun moving policies automatically for customers, but if customers are not happy they will have a 14-day cooling-off period after the move.

He said it was very disappointing from a regulation perspective that another foreign insurer operating here in Ireland had gone out of business like this.