Ireland's economy will continue to enjoy robust growth over the next two years, according to the Organisation for Economic Cooperation and Development.

However the pace is predicted to ease as the economy reaches full capacity and external threats, particularly Brexit, weigh.

In its latest Economic Outlook, the OECD forecasts Irish GDP growth of 5.9% this year.

However it anticipates that domestic demand will remain strong, as unemployment heads towards record lows.

The OECD says that will add "significant" upward pressure to wages, however, which could feed into higher inflation.

According to the OECD, the Central Bank's lending restrictions have helped to reduce risky lending in the Irish banking system, and says that the regulator should introduce additional measures "swiftly" if needed.

It also urges the Government to continue to improve the country's fiscal position, but says it should be ready to ease that stance in the event of a no-deal Brexit.

Trade tensions and higher interest rates are slowing the global economy, though for now there are no signs of a sharp downturn, the OECD said today as it lowered its outlook for next year.

The Organisation for Economic Cooperation and Development forecasts that global growth would slow from 3.7% this year to 3.5% in 2019 and 2020.

The global growth slowdown would be worst in non-OECD countries, with many emerging-market economies likely to see capital outflows as the US Federal Reserve gradually raised interest rates.

The OECD cut its outlook for countries at risk such as Brazil, Russia, Turkey and South Africa.

Rising interest rates could also spur financial markets to reconsider and thus reprice the risks to which investors are exposed, triggering a return to volatility, the OECD said.

"We're returning to the long-term trend. We're not expecting a hard landing, however, there's a lot of risks. A soft landing is always difficult," OECD chief economist Laurence Boone said.

"This time it is more challenging than usual because of the trade tensions and because of capital flows from emerging markets to countries normalising monetary policy," the economist added. 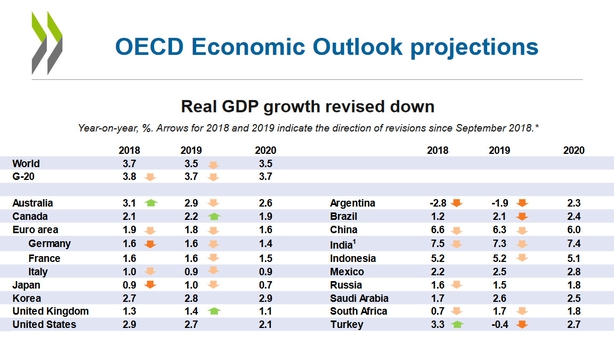 A full-blown trade war and the resulting economic uncertainty could knock as much as 0.8% off global gross domestic product by 2021, the OECD calculated.

Though at the source of the current tensions, the US economy was expected to fare better than most other major economies, albeit because of costly fiscal stimulus.

The OECD left its forecasts for the US in 2018 and 2019 unchanged, projecting growth in the world's biggest economy would slow from nearly 3% this year to slightly more than 2% in 2020 as the impact of tax cuts waned and higher tariffs added to business costs.

Trimming its outlook for China, the OECD forecast the country's growth would slow from 6.6% to a 30-year low of 6% in 2020 as authorities tried to engineer a soft landing in the face of higher US tariffs.

The outlook for the euro area was also slightly darker than in September, with growth seen slipping from nearly 2% this year to 1.6% in 2020 despite loose monetary policy over the period.

The Italian economy was seen slowing more than previously expected despite the expansionary budget of the populist-led government that has created friction with Brussels.

The OECD forecast Italian growth at only 1% this year, lingering at 0.9% in 2019 and 2020, as stalled job creation and higher inflation eroded the boost from the budget stimulus.

However, after the fiscal boost peaked in 2019, UK growth would fall back to 1.1%, the OECD said, urging the government to be prepared to respond if the economy weakened significantly due to Brexit.