New figures from the Central Statistics Office show that exports to the UK fell by 5% (€62m) to €1.131 billion in August of this year compared to the same time last year.

The CSO said that exports to the UK accounted for 10% of the country's total exports in August.

The CSO said the August drop in UK exports was mainly due to decreases in exports of chemicals and related products as well as machinery and transport equipment.

However, imports from the UK increased by 2% to €1,446 billion on the higher of lower food and live animals imports and machinery and transport equipment.

Today's figures show that imports from the UK made up 20% of total Irish imports in August.

Overall, the value of seasonally adjusted goods exports decreased by €372m (3%) to €11.451 billion in August, today's preliminary figures from the CSO show.

The biggest category of exports in August was medical and pharmaceutical products and the CSO said that exports of these goods accounted for over 34% of total goods exports during the month.

Exports of medical and pharmaceutical products jumped by 44% to €3.880m in August compared to the same time last year, while exports of organic chemicals rose by 50% and accounted for 19% of total goods exports.

Meanwhile, the value of imports for August was €7.172 billion, up 18% on the same month last year.

The CSO noted that imports of medical and pharmaceutical products increased by 48% to €1.387 billion, while imports of mineral fuels jumped by 53% to €508m and imports of office machines and automatic data processing machines also rose by 53%. 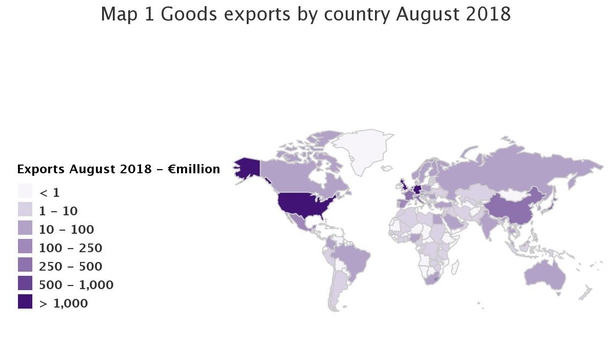 Over, the EU accounted for 53% of total exports in August of this year, with exports to these countries rising by 22% on an annual basis. 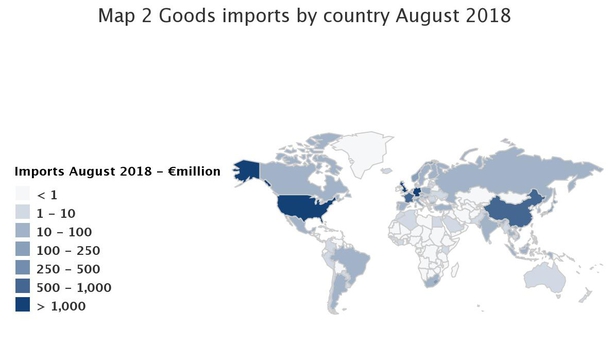 The US was the main non-EU destination accounting for 27% of total exports in August 2018.

And the US with 18% and China with 8% were the main non-EU sources of imports.