Asking prices for homes fell by 2.5% in Dublin and by 0.8% nationally in the third quarter, the latest Residential Property Price Report from MyHome.ie shows.

The report, which was published in association with Davy, shows the median asking price for new sales nationally stood at €268,000 in the third quarter, down €2,000 from the second quarter of 2018.

The report shows that the annual rate of inflation for newly listed properties nationally is now 5.9%. It is just 2.2% in Dublin - the slowest pace of growth in two years.

The author of the report, Davy's chief economist Conall MacCoille, said that asking price inflation has slowed as expectations for future growth have been reined in.

"While the magnitude of the drop this quarter may be surprising, some of the quarterly decline may be seasonal, reflecting typically weaker prices at the end of a busy summer trading season," he added.

The economist said that with jobs and wages both exceeding 3%, underlying demand remains exceptionally strong. But he cautioned that Brexit remains something of a wild card. 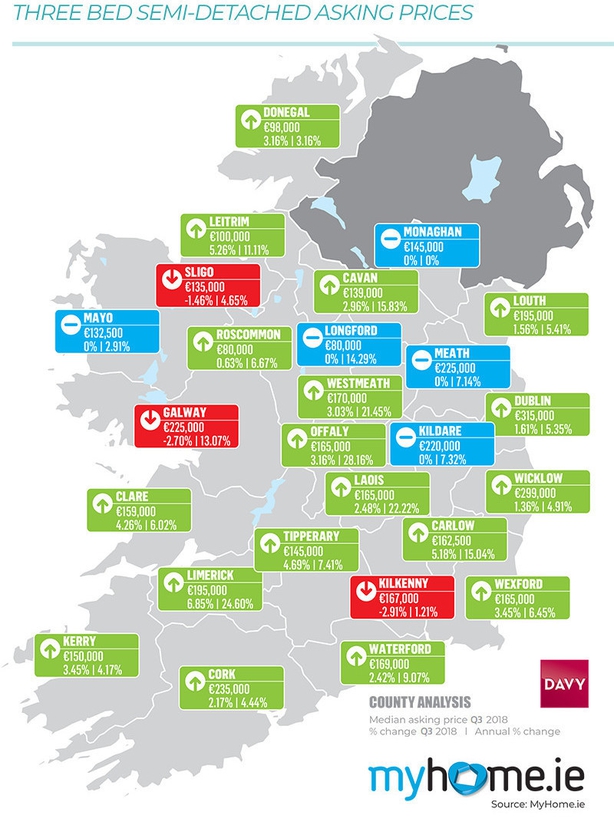 Today's MyHome.ie report also highlighted a pick-up in homebuilding activity. It said that in the 12 months to June, completions equalled 16,300 - already well ahead of the 14,446 recorded for 2017.

Angela Keegan, Myhome.ie's managing director, said the increase in housebuilding was starting to feed through to improved stock levels, especially in Dublin.

She noted there were 22,658 homes listed for sale on the website in September, up 6% on last year.

"This is the second consecutive quarter in which the stock listed for sale has increased, breaking the downward trend over the past six years," Ms Keegan said.

"The improvement is even better in Dublin with 5,000 properties listed for sale, up 18% on last year," she added.

Meanwhile, the average time to sale agreed also continues to decline. On a national basis, it stands at three and a half months, down from 3.8 months. In Dublin, it remains steady at 2.9 months.