The number of home mortgage accounts in arrears for more than 90 days fell at the fastest quarterly rate in three years to stand at 6.3% at the end of June, new figures from the Central Bank show.

This compares to 6.7% three months earlier and marks the 19th quarterly decline in a row.

Long-term arrears, or accounts over 720 days behind in their payments, fell by 4.3% in the second quarter to mark the 12th quarterly decline in a row.

The Central Bank said that these arrears now make up 42% of all accounts in arrears and at €2.5 billion represent 91% of arrears balances outstanding.

Today's figures also show that the number of home mortgages that were classified as restructured at the end of June stood at 116,010.

Of these, 87% were deemed to be meeting the terms of their new restructured arrangements, up slightly on the previous quarter.

The Central Bank said a total of 7,857 new restructure arrangements were agreed during the second quarter of this year, the highest level since the end of 2016. 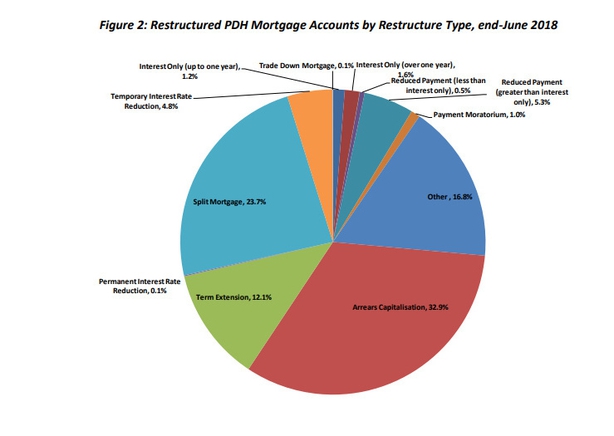 Arrears capitalisation continue to account for the largest share of restructured accounts at 33%, the Central Bank noted.

The Central Bank said the courts granted repossession orders for 243 homes in the three months from April to June, while 236 properties were disposed of by lenders.

On buy-to-let mortgages, the Central Bank said that 18% of these mortgages were in arrears at the end of the second quarter, a decrease of 5.4% over the quarter.

According to today's data, non-bank entities now hold 7% of all home mortgages. Within this, 5% are hld by regulated retail credit frims with the remaining 2% held by unregulated home owners.

The Central Bank noted that unregulated loan owners now 19% of all home mortgages in arrears for over 720 days.