The country's imports surged by a fifth (+ €1.3 billion) to €7.76 billion in June when compared with the same month last year, latest figures from the Central Statistics Office show.

There was just a 1% rise in exports to €11.8 billion for the same period, leading to Ireland's trade surplus to fall by €1.2 billion (22%) to slightly above €4 billion for June.

During the month there was a significant rise in imports in the areas of medical and pharmaceutical products (+12% to €1.24 billion) and organic chemicals (+44% to €399m). 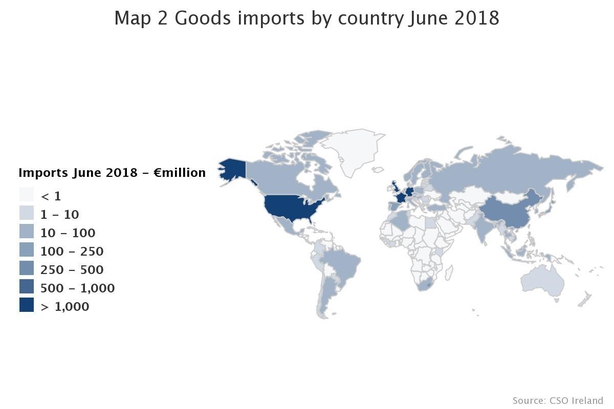 The CSO figures also show exports to Great Britain were €20m, or 2%, lower at €1.2 billion year-on-year in June, while for the first six months of the year exports to GB were down 7% at €6.74 billion.

Meanwhile, imports from Great Britain increased by €51m (+4%) to €1.4 billion during June.

The European Union accounted for over half of Ireland's exports during the month, with a value of €6.48 billion. 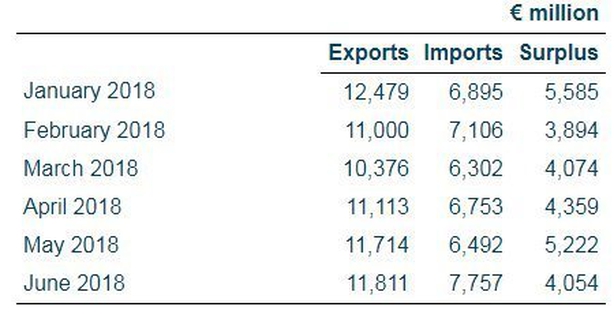 The USA was the main non-EU destination for Irish exports in June, accounting for €3.23 billion (26%) of the total.

Commenting on the figures, Chief Economist with Merrion Capital Alan McQuaid said: "Business and consumer confidence have been dented to some degree, though not in major way by the uncertainty surrounding Brexit.

"The movement in the euro/sterling exchange rate will be critical in this regard. The pound has been volatile in recent months, and remains a lot higher than desirable for Irish exporters.

"Positive vibes coming out of the UK and Brussels as regards the "Brexit" negotiations will be required if the pound is to regain lost ground and see a sustained appreciation against the euro, but that doesn’t appear to be forthcoming at this juncture," Mr McQuaid added.