New figures from the Central Statistics Office show the economy is now estimated to have grown by 7.2% in 2017, down from its initial estimate of 7.8%.

The CSO said the country's gross domestic product shrank by 0.6% on a quarterly basis in the first three months of the year but was still 9.1% higher than a year ago.

Irish GDP has outperformed everywhere else in Europe since 2014 but the relevance of using the conventional measure for economic growth was called into question when 2015 growth was adjusted up to 26% after a massive revision to the stock of capital assets.

New figures from the CSO show the economy has grown by 7.2% in 2017https://t.co/WxZp5etUAj pic.twitter.com/ZjbUwObE1g

The CSO said that Modified Domestic Demand - a new measure used to remove the distorting effects of foreign multinational companies - showed growth of 2.8% during the first quarter.

Meanwhile, today's CSO figures also showed that total domestic demand increased by 3.7% in the first quarter of this year compared to the previous three month period.

Personal consumption, which accounts for 50% of domestic demand, decreased by 0.3% in the first three months of the year.

The Government had said that underlying domestic demand was a better gauge of activity in the real economy and said it was projected to increase by 3.9% this year.

Many economists also rely on the labour market as a more accurate barometer, with unemployment falling to 5.1% in June from a high of 16% in 2012. 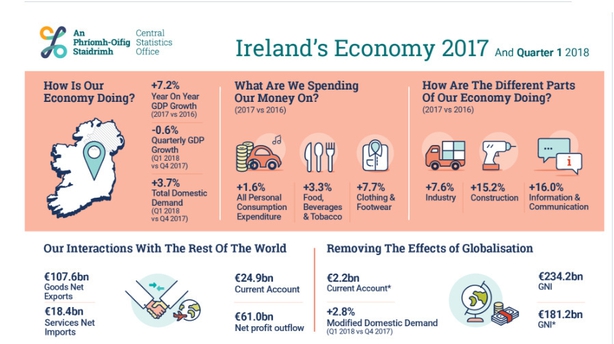 A swathe of other data, from retail sales and business surveys, have also pointed to a sharp recovery continuing into the first quarter.

Today's figures from the CSO also show that the Information and Communication sector grew by 13.7% in the first quarter, while Industry decreased by 9.7% in volume terms from the high levels recorded in the previous quarter.

In the domestically focused sectors, the CSO said that the Distribution, Transport, Hotels and Restaurants sector decreased by 1.1%, while growth in the Construction sector was flat in the quarter.

The Agriculture, Forestry and Fishing sector also showed a decrease of 1.6%. 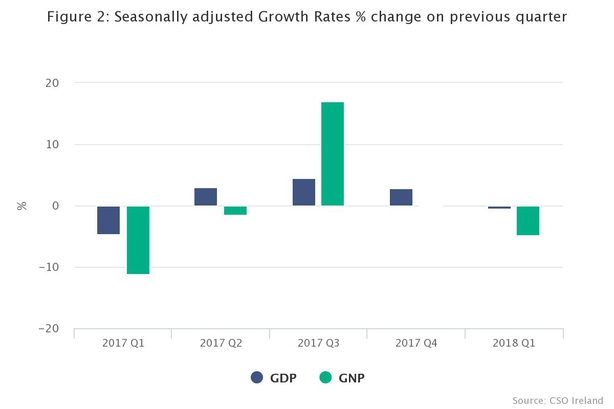 On the exports side, the CSO said that exports decreased by 5.8% in the first quarter of 2018 when compared with the fourth quarter of 2017.

When combined with an import decrease of 2.5%, overall net exports for the quarter declined by 13.2%.

Separate Balance of Payments figures from the CSO show that the Current Account recorded a surplus of €9.6 billion in flows with the rest of the world in the first quarter of 2018.

It said the overall growth in the surplus was driven by an increase of €2 billion in the Merchandise surplus and an improvement of €2.4 billion in the Services and Income deficit.

"Today's data also provide clear evidence of continued momentum in the economy this year with annual GDP growth of 9.1% recorded in the first quarter," the Minister said.

"While this is primarily driven by the external sector, private consumption is also making a strong positive contribution up 2.7% on an annual basis," he added.

Mr Donohoe said that notwithstanding the well-known limitations with GDP, it is clear that the economy continues to perform strongly.

"Full-time employment increased by over 4% in the first quarter of this year, unemployment continues to fall and tax receipts to end-June are up 5.4% over the same period last year," he stated.

Commenting on today's figures, the chair of the Irish Fiscal Advisory Council, Seamus Coffey, has hailed the growth in the economy as "rapid and broad-based".

He said today's CSO figures are impacted by the multinational sector, but the figures do give further and better outcomes which indicate the economy is growing by between 3-4%.

He said the unemployment rate has fallen close to 5% and the economy has picked up a lot of lost growth.

Mr Coffey said there was no overheating pressures evident in the economy but things can change rapidly and he added that the Government should be putting money aside now for any future deficits.

Meanwhile, Merrion economist Alan McQuaid said that based on the data for the first quarter, it looks like headline GDP growth for 2018 as a whole will be a lot higher than most commentators had been predicting.