KBC Bank has today announced a reduction across its range of fixed mortgage rates for homebuyers and switchers.

The bank said it will reduce its one, two, three and five year fixed rates by between 0.25% and 0.55%, while it will maintain its market leading 10-year fixed rates.

The new rates will be available to both new and existing KBC mortgage customers and will be effective from September 3. 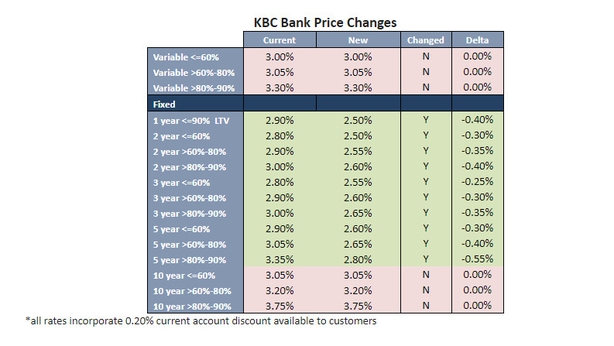 Comparison website Bonkers.ie said the changes announced by the bank means that a first-time buyer borrowing €250,000 over 30 years would save almost €75 a month by getting KBC's new five-year rate.

Daragh Cassidy, head of communications at Bonkers.ie, said that KBC's reductions are "unsurprising" given the recent reductions by Ulster Bank.

He said it was "great news" for mortgage customers in Ireland.

The question now is not if, but when, AIB and the rest of the competition will follow suit, he added.