New Central Statistics Office figures show a rise in the seasonally-adjusted surplus in May to €5.226 billion - the second-highest on record - and up from the revised surplus of €4.359 billion in April.

Today's figures show that exports of medical and pharmaceutical products jumped by 54% to €4.439 billion in May compared to the same time last year.

But exports of organic chemicals decreased by 12% to €1.807 billion and exports of electrical machinery fell by 24% to €363m

Meanwhile, imports of mineral fuels imports rose by 23% to €450m in May, while imports of machinery specialised for particular industries increased jumped 51% to €195m and imports of other transport equipment, including aircraft slumped by 37% to €1.203 billion.

Exports to the UK for the five months from January to May stood at €5.527 billion, down 8% when compared to the first five months of 2017.

Imports from the UK also decreased by 6% to €1.522 billion in May compared with the same month last year on the back of a lower level of chemicals and related products imports. 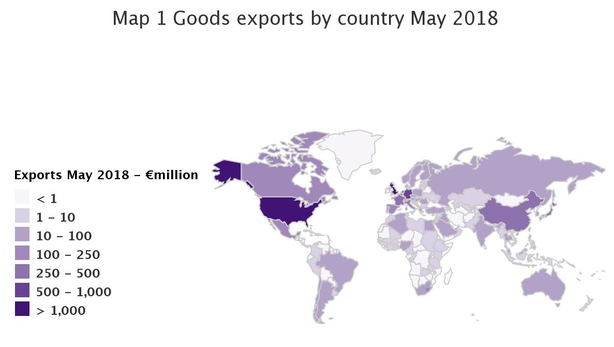 Total EU exports in May increased by 1% on the same time last year.

The US was the main non-EU destination accounting for €3.205 billion (27%) of total exports in May of this year,

The US and China were the main non-EU sources of imports in May, the CSO added.