The European Commission has cut its forecasts for the euro zone's economic growth this year, saying the main causes for the revision were trade tensions with the US and rising oil prices which are pushing the bloc's inflation higher.

The slowdown of the euro zone economy is set to affect all major economies of the bloc.

But the slowdown is expected to hit Italy harder, as the country will record the lowest growth rate in Europe, matched only by Britain among all EU countries.

The EU executive estimated the euro zone will grow by 2.1% this year, lower than the 2.3% gross domestic product (GDP) increase it had forecast in its previous estimates released in May.

Next year the bloc's growth should further slow to 2%, unchanged from the previous forecast. 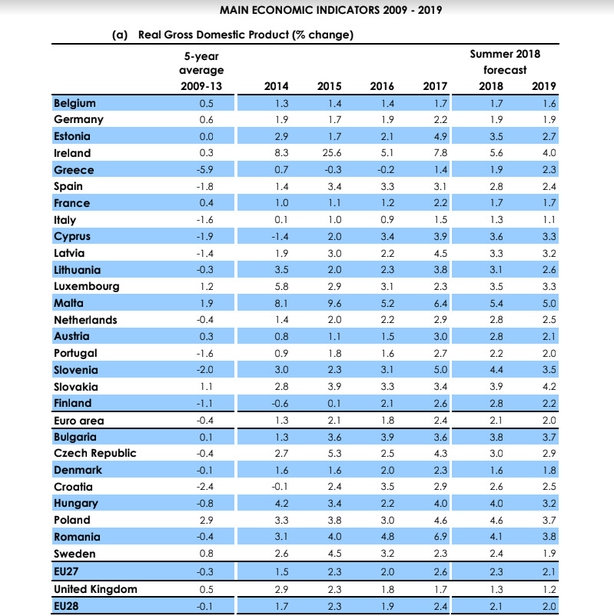 "The downward revision of GDP growth since May shows that an unfavourable external environment, such as growing trade tensions with the US, can dampen confidence and take a toll on economic expansion," EU commission's vice-president Valdis Dombrovskis said.

Rising oil prices have also contributed to the slowdown, the EU economics commissioner Pierre Moscovici said, and are expected to push euro zone's inflation up to 1.7% this year and next.

Germany and France, the two largest economies of the euro zone, are expected to lose steam this year and next.

The slowest-growing economy of the bloc will remain Italy which is expected to grow only 1.3% this year, less than the 1.5% estimated in May.

One of the causes cited by the Commission for the revision were "re-emerging concerns or uncertainty about economic policies", as Italy's new eurosceptic government has launched ambiguous messages on its future spending plans.

Only Britain is expected to match Italy's sluggish growth among all the 28 states of the European Union.

It will grow 1.3% this year, according to the Commission, less than the previously estimated 1.5% growth.

The UK's inflation rate is also forecast to go up further to 2.6% this year, from a previous estimate of 2.5%.