The operator of Heathrow Airport has revealed it will shift its international headquarters from the UK to Amsterdam in the latest sign of concern over the impact of Brexit.

Spanish group Ferrovial - the largest shareholder in Heathrow - confirmed the move from Oxford to the Netherlands will allow it to come under European Union law following Brexit next March.

It comes after the UK government voted to give the green light to a third runway at Heathrow last night.

UK Transport Secretary Chris Grayling said it would provide a "clear path to our future as a global nation in the post-Brexit world".

"Ferrovial has considered the relocation of the corporate registered office of holding companies of international businesses, currently in the UK, to a jurisdiction (Amsterdam) which is under the umbrella of European Union law," the company said.

"There is no impact on employment, and our operations in the UK will remain unchanged," it added.

It marks the latest in a string of corporate fears over the UK's EU divorce, with the Society of Motor Manufacturers and Traders calling today for an end to Brexit uncertainties that have sparked a significant drop in sector investment.

Last week, plane manufacturer Airbus warned it could pull out of the UK with the loss of thousands of jobs if Britain leaves the single market and customs union in March 2019 without any transition agreement in place.

Ferrovial's decision relates to its holding company that controls all of its operations outside of Spain, including its 25% stake in Heathrow as well as holdings in Glasgow, Southampton and Aberdeen airports.

The group is also helping to build the Crossrail project, which will pass through 38 stations and run for more than 100km across the UK.

Outside of the UK, Ferrovial also runs airports, waste management and other infrastructure services across Europe, North America and Australia.

Last night, British politicians voted strongly in favour of building a new runway at London's Heathrow Airport, paving the way for the airport's expansion after decades of delays and policy U-turns.

Politicians voted 415 to 119 in favour of the move, a decision that has long divided parliament regardless of party lines. 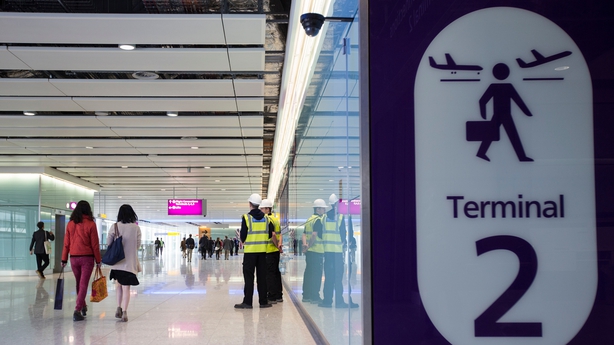 Some have opposed the extra noise and air pollution it will bring to London, particularly its western regions.

In a sign of the battles still to come, London Mayor Sadiq Khan said he would bring legal action to block the expansion while the owner of British Airways warned that it would not accept higher charges for consumers and airlines.

Heathrow's most high-profile opponent, foreign minister Boris Johnson, who once said he would lie down in front of bulldozers to stop the expansion, was in Afghanistan and so missed the vote.

British Prime Minister Theresa May said the £14 billion expansion of Europe's busiest airport - which is operating at full capacity - shows that Britain is open for business after Brexit.

"She believes it sends out an important message about global Britain and making the most of the opportunities which lie ahead of us," her spokesman told reporters.

Heathrow has said construction could start in 2021, with the runway open in 2026.

Before it can get to the planning stage, any legal challenge would see a judge review the lawfulness of the government's policy.

The decision to expand Heathrow follows almost half a century of indecision on how and where to add new airport capacity in densely populated southeast England.

If finally opened, it will be the first full-length runway built in the London area for 70 years.