The European Central Bank will be patient in tightening policy further, the ECB President said today.

Mario Draghi said that market pricings for its first post-crisis rate hike were consistent with its aim to move gradually.

The ECB decided last week to end its €2.6 trillion bond purchase programme by the end of the year.

But it said that interest rates would stay unchanged at least until next summer, a wording that pushed back rate hike expectations by three months to September 2019.

But uncertainty is rising as the threat of a global trade war looms, while a rise in inflation is still far from certain as higher wages may not translate into faster price growth, Draghi told the ECB's hallmark policy forum in Sintra, Portugal.

"We will remain patient in determining the timing of the first rate rise and will take a gradual approach to adjusting policy thereafter," Draghi said.

"The path of very short-term interest rates that is implicit in the term structure of today's money market interest rates broadly reflects these principles," he said.

This stood in contrast with a brutal market reaction to Draghi's words in Sintra a year earlier, when the mere hint of a reduction in monetary stimulus caused the euro to shoot up against the dollar.

This year Draghi managed the rare feat of talking down the euro and bond yields while announcing a tightening of monetary policy at his press conference on June 14.

While the ECB's guidance for steady rates 'through' next summer is intentionally vague, policymaker said the wording means a decision only after the summer and not during one of the summer meetings.

"What we're trying to convey is that 'through the summer' means the end of the summer," Central Bank Governor Philip Lane said in Sintra today. 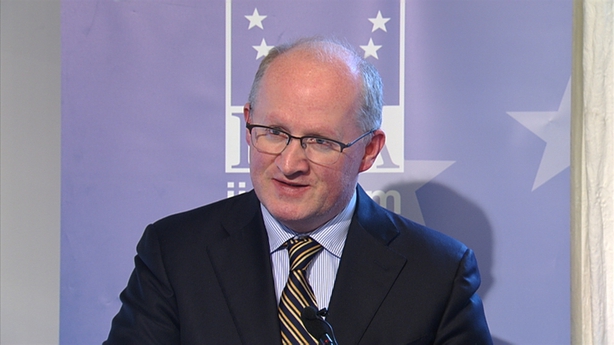 "It's way too early to have a discussion on what comes after that," Professor Lane added.

The ECB targets inflation at just below 2% but has undershot this target for over five years, even as it has unleashed an unprecedented cocktail of unconventional measures to rekindle price growth.

While prices are now on the rise, in part due to higher oil prices, and the ECB sees inflation near its target by 2020, Draghi said uncertainly prevails, clouding the outlook for price growth.

But a key measure of long term inflation expectations is hovering near 1.75%, within striking distance of the ECB's target, suggesting increased market confidence in the bank's willingness to push up inflation.

"What is key is that inflation expectations remain well anchored," Draghi said. "But uncertainty arising from economic developments lingers throughout the various stages of this process."

He added that downside risks include the threat of increased global protectionism, rising oil prices and the possibility of persistent heightened financial market volatility.

While wages are on the rise, this would not automatically translate into higher inflation, Draghi said, questioning the traditional relationship between prices and earnings.

"Even if wages continue to rise as we expect, we cannot exclude that structural factors beyond the central bank's control might impede the transmission of wages into consumer prices," the ECB chief said.