Financial services will remain a "guiding light" for Britain's economy after Brexit and there is no intention to "rip up the rulebook" to compete better as a top financial centre, a government minister said today.

"My priority is to ensure that financial services remain a national priority in robust health," Economic Secretary to the Treasury John Glen told the annual conference of FIA IDX, a derivatives industry trade body.

Britain, the European Union's biggest financial centre, leaves the bloc next March, raising questions about the ability of banks, insurers and asset managers in the UK to continue serving customers in the EU.

Some pro-Brexit lawmakers say that if Britain does not get a good trade deal with the EU, it should ease banking rules to allow the City of London financial district to keep ahead of the pack.

"We do not intend to rip up the rulebook after Brexit," said Glen, who is responsible for the financial services industry as a junior minister at the Treasury.

Britain had to bail out banks during the 2007-09 financial crisis and Glen said tougher rules introduced since then had attracted international plaudits.

Britain sold off a chunk of its shares in Royal Bank of Scotland today.

"We are witnessing the triumphant return of a degree of discipline and robust regulation working in tandem with an ever dynamic market," Glen said.

Britain must not forget the main aim of regulation is to guard financial stability and protect taxpayers from having to deal with failures, he said.

Banks, insurers and asset managers with European bases in Britain are moving activities and staff from London to hubs in the EU in case of a no-deal Brexit.

Glen said it was neither in the interests of Britain nor the EU to exclude financial services from a future trading relationship after Brexit.

But so far, Brussels has indicated that financial services in Britain will likely get the same degree of restricted market access that other non-EU states like the US and Singapore have.

Glen said he would ensure London remained one of the largest global centres for trading and clearing derivatives. 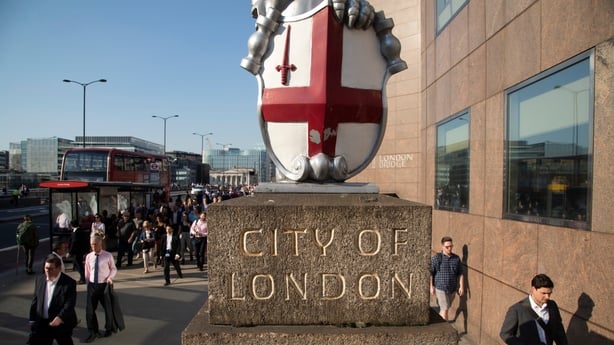 The derivatives industry in Europe, where London dominates, is worried the EU will ratchet up pressure to move clearing of euro-denominated contracts from Britain to the continent.

The FIA published a survey of 15 market participants which account for the bulk of customer clearing volume across the EU.

It said the EU's executive European Commission should confirm if the bloc will allow customers to continue clearing derivatives on clearing houses in Britain after it leaves the EU next March.

"This snapshot survey reveals that significant uncertainty remains among clearing firms regarding the UK and EU regulatory environment post Brexit," the FIA said in a statement.

The FIA, whose European base is in London, announced it had opened a Brussels office to ensure it had "boots on the ground" to work with EU lawmakers and regulators after Brexit.