European Union finance ministers have reached an agreement on reforming bank capital rules, a major step towards boosting the bloc's financial stability and a stepping stone towards a deal on a backstop for its bank-rescue fund in June.

The accord came after 18 months of heated debate among the 28 EU governments on how to apply new global bank capital rules that overhauled financial regulations after the 2007-2009 global crisis.

"The Council (of EU finance ministers) has agreed a general approach on the banking package," said Vladislav Goranov, the Finance Minister of Bulgaria, the country that holds the EU presidency.

He made his comments at a public session of a meeting of EU finance ministers in Brussels.

Finance Minister Paschal Donohoe said the package of measures is another step in the delivery of Banking Union in the EU.

"The measures will further reduce risk in the banking sector and ensure that our banks are stronger and better supervised, that they are adequately capitalised and that appropriate safeguards are in place to protect the taxpayer into the future," Mr Donohoe added. 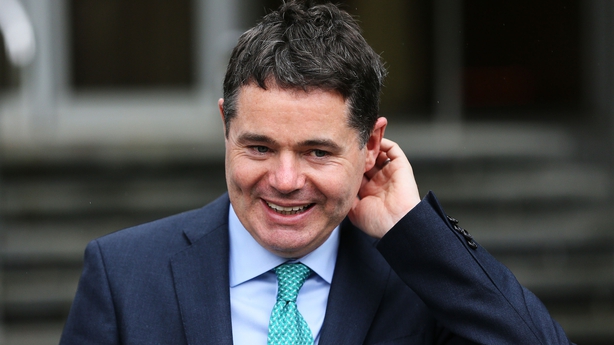 Today's deal paves the way for another breakthrough on the bloc's bank-rescue fund, which ministers committed today to equip with a backstop, although the final decision will be made in June.

The two measures are seen as interlinked because the banking capital rules are expected to reduce bank risk.

This move would in turn allow more sharing of risk among euro zone countries in the form of a common backstop to prop up the sector's rescue facility, known as Single Resolution Fund.

Under the accord, which still needs approval by EU lawmakers, European banks will have to abide by a new set of requirements aimed at keeping their lending in check and ensuring they have stable funding sources.

Germany and France fully backed the deal, others accepted it with some political reservations, while Italy and Greece abstained.

They argued that the deal on capital rules should be matched by an agreement on sharing banking risk by June.

Under the deal, the euro zone's agency for troubled banks, the Single Resolution Board, will be given a clearer mandate to set the level of capital buffers that banks should hold against the risk of failure.

The "Minimum Requirement for own funds and Eligible Liabilities" (MREL) will be set at 8% of large banks' total liabilities and own funds.

The SRB will, however, be able to require higher buffers for banks it deems insufficiently safe, or a lower buffer for better capitalised institutions.

Ministers agreed on a favourable capital treatment for large banks in countries that belong to the bloc's banking union, such as France's Societe Generale, Germany's Deutsche Bank and Italy's Unicredit, as their exposure to other countries of the bloc will be treated as a safer domestic exposure.

The new rules would also require large foreign banks to set up intermediate parent undertakings (IPUs) that would bring their EU operations under a single holding company.

The move effectively mirrors U..rules and is seen as crucial to protecting the bloc's financial stability against risks posed by major banks.

The measure would affect large financial institutions from the US, Japan and Britain after it leaves the European Union.

In a minor concession to reluctant states, ministers reiterated their intent to reach an agreement on a state-funded backstop for the euro zone's bank-funded Single Resolution Fund.

The fund is currently equipped with €17 billion, but that is not considered enough to cope with a larger banking crisis.

The backstop is expected to be provided by the euro zone's state-backed bailout fund, the European Stability Mechanism.

Another measure of risk sharing, a common insurance of covered bank deposits, is still far from being agreed, despite being a pillar of the banking union, the EU's flagship project to strengthen its banking sector after years of crisis.