Russian metals tycoon Oleg Deripaska has stepped down as a director of his aluminium firm Rusal.

The move is part of a choreographed series of steps which he hopes will persuade the US government to rescind sanctions that have crippled his businesses.

Deripaska is now actively preparing the next step - reducing his stake in En+ - the group which controls Rusal, to a level where Washington would be willing to remove his businesses from its sanctions blacklist, three sources familiar with the discussions said.

Deripaska and the biggest companies in his empire were included on a US Treasury Department sanctions blacklist in April.

Washington said he and fellow tycoons were profiting from association with a Kremlin conducting "malign activities" around the globe.

The sanctions paralysed Rusal's supply chain, scared off many customers, froze Deripaska out of Western debt markets and sent shares in his major companies plummeting.

Rusal is the parent company of Aughinish Alumina in Co Limerick. The Askeaton company refines imported bauxite into alumina which is a major ingredient in the manufacturing of aluminium.

In an illustration of the damage dealt by the sanctions, Russia's VTB bank said it had become owner of a 9.6% stake in En+ after the firm's stocks sank.

The price slump triggered a margin call, forcing a minority shareholder, Singapore's AnAn Group, to relinquish the stake to the lender, a VTB executive said.

In a statement issued in Hong Kong, where it is listed, Rusal said Deripaska, a non-executive director of the company, had stepped down as director.

That came a day after the chief executive and seven board members quit, also in a move to distance the firm from Deripaska and his associates.

Deripaska is seeking to persuade Washington to ease the sanctions on his businesses in exchange for him scaling back his association with his companies. 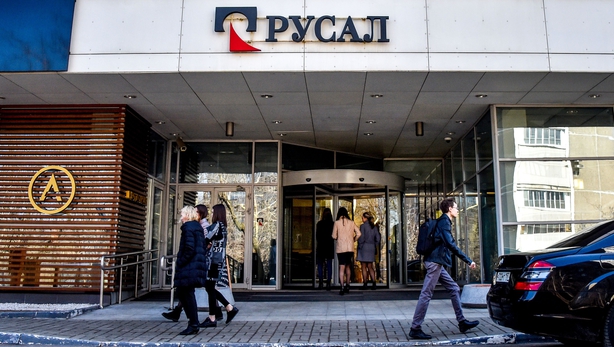 The key element now is for him to reduce his controlling stake. One source familiar with the discussions said Deripaska had been intent on holding on to control, but has now accepted there is no alternative if his businesses are to survive.

The manoeuvre under consideration, according to three sources familiar with the discussions, would mirror steps taken by another sanctioned Russian tycoon, Viktor Vekselberg.

His Swiss-based company Sulzer bought some of Vekselberg's shares, prompting the US Treasury Department to say that Sulzer was not at risk from sanctions.

Deripaska currently holds a 66% stake in En+. The group declined immediate comment when contacted by Reuters.

The three sources, who asked not to be named, said that the share buyback manoeuvre was one of several options under consideration for reducing Deripaska's stake.

The sources said Deripaska's representatives were in discussions with the US Treasury Department's Office of Foreign Assets Control (OFAC), which oversees sanctions, to establish if the manoeuvre would be deemed enough to remove the companies from the sanctions blacklist.

Since sanctions hit, stocks of aluminium ingots have been stacking up at at least one Rusal plant, because buyers have cancelled orders.

The government source, who spoke on condition of anonymity, said Deripaska had also applied for loans for Rusal from Russian lender Promsvyazbank.

The bank is under the control of the Russian central bank and has been earmarked by the Kremlin to provide finance to sanctioned Russian firms, a task most regular banks will not undertake because of the sanctions risk.

Deripaska also sought state support for automaker GAZ, which is part of his business empire and has also been affected by the sanctions, the government source said.

Russian authorities have approved a loan for GAZ, but no decision has yet been made on the loan request for Rusal, according to the source.