Construction firms increased their workforce on the back of greater workloads as activity in the sector accelerated to a three-month high in April.

The Ulster Bank Construction purchasing managers' index rose from 57.5 in March to 60.7 in April, marking the second fastest pace of growth since May 2017.

Ulster Bank said the buoyancy in activity and new orders continued to underpin very strong and accelerated rates of job creation with the employment element of the PMI picking up last month to its highest level since early 2017.

The bank said that total activity growth was supported by sharper rises in housing and commercial activity, each of which reported marked increases that were the fastest in 11 months.

But growth in civil engineering activity softened and was the weakest of the three monitored sub-sectors, it added.

Strains on capacities reportedly led to many suppliers increasing their prices and anecdotal evidence showed the rise in cost burdens was due to higher raw material prices, especially steel and insulation. 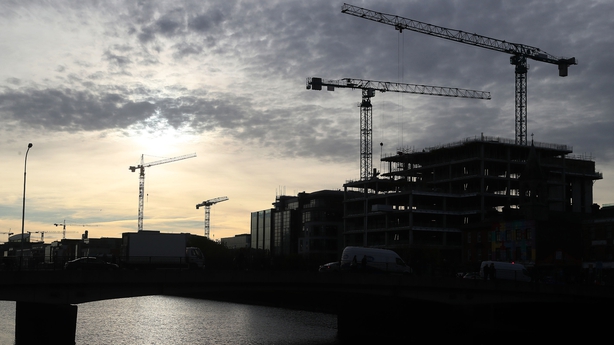 Simon Barry, chief economist Republic of Ireland at Ulster Bank, said the latest PMI survey showed that after a weather-related slowdown in March, the headline PMI picked back up to a very elevated reading of 60.7 in April.

"There was a very sharp acceleration in commercial activity which took the Commercial PMI to its highest level since last May, in the process leaving commercial as the strongest performing activity category last month," Mr Barry noted.

"But the improvement was broadly-based, with the pace of growth in housing activity also picking up to an 11-month high, while civil engineering recorded a fifth consecutive month of expansion, albeit at a somewhat slower pace in April," he added.

Mr Barry said that while sentiment among firms about the sector's prospects over the coming 12 months moderated slightly in April, it still remains at elevated levels.

"58% of respondents anticipate higher output levels over the year ahead, reflecting expectations for healthy construction demand in general and within the residential sector in particular," he added.