New figures from the Central Bank show that the number of home mortgage accounts in arrears fell for the 18th quarter in a row during the fourth quarter of last year.

The Central Bank said the number of homeowners in arrears for more than 90 days fell to 6.6% at the end of 2017 from 6.9% three months earlier - the fastest quarterly drop in two years.

The number of accounts in arrears over 720 days declined by 8.5% to just under 29,000 at the end of December, representing more than half of homeowners who have missed three or more payments.

The number of mortgage accounts in areas for over 360 days fell to 36,954 in the last three months of the year, down 2,195 over the quarter. 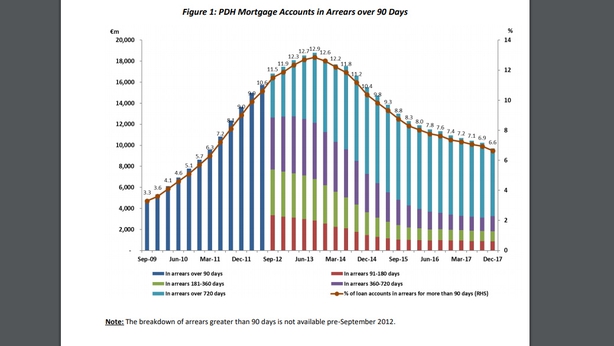 Today's figures also show that the number of home mortgage accounts that were classified as restructuring by the end of December stood at 118,477.

Of these, 87% were meeting the terms of their current restructuring arrangement, down slightly from the previous quarter.