Ryanair has agreed to buy a majority stake in the new Austrian leisure airline founded by former motor racing champion Niki Lauda in a major push on the German and Austrian markets dominated by Lufthansa.

The airline has agreed to buy an initial 24.9% stake in Vienna-based Laudamotion, formed out of insolvent carrier Niki, formerly part of Air Berlin.

That will rise to 75% "as soon as possible", subject to EU regulatory approval, Ryanair said in a statement.

Ryanair will lease Laudamotion six crewed planes to increase its fleet to 21 planes this summer and to 30 planes within three years. Ryanair currently operates a fleet of 430 Boeing 737s.

Niki, which flies to tourist destinations from Germany and Austria using Airbus A320 planes, was seen as the most attractive part of insolvent Air Berlin and this deal sees it end up in the hands of Ryanair, after attempts by Lufthansa and Aer Lingus-parent IAG to secure it.

"This surprise move by Ryanair will be exactly what Lufthansa is not looking for," aviation consultant John Strickland said.

"Despite the consolidating effect of the majority Air Berlin acquisition (under which Lufthansa bought much of the business, but not Niki) they will face not only growing Ryanair capacity in Germany but now also significant influence in Austria," he said.

Germany has been slow to open up to low cost airlines, helping to protect home carrier Lufthansa against the march of the likes of EasyJet and Ryanair.

Low-cost carriers typically account for about 10-20% of traffic at Germany's airports, while they command an over 50% market share in Europe as a whole on short-haul flights.

But after the collapse of Air Berlin, Germany's second largest airline, the budget players are taking their chance to expand.

EasyJet has acquired Air Berlin's operations at Berlin Tegel airport and has started German domestic routes in competition with Lufthansa.

Ryanair chief executive Michael O'Leary had been a fierce critic of Lufthansa's initial plans to buy much of Air Berlin.

After dropping the Niki plans, Lufthansa has ended up with Air Berlin unit LGW, but also took on 77 of the defunct carrier's fleet of around 140 leased planes.

Lufthansa also recently overtook Ryanair as Europe's largest airline by passenger numbers and the Laudamotion acquisition could help Ryanair to regain the title.

"This Laudamotion partnership is good news for Austrian and German consumers/visitors who can now look forward to real competition, more choice and lower fares," Michael O'Leary said in a statement.

Niki Lauda needed partners to help get Laudamotion off the ground and was working with Thomas Cook's Condor and was also in discussions over leasing crewed planes to Lufthansa's budget arm Eurowings. 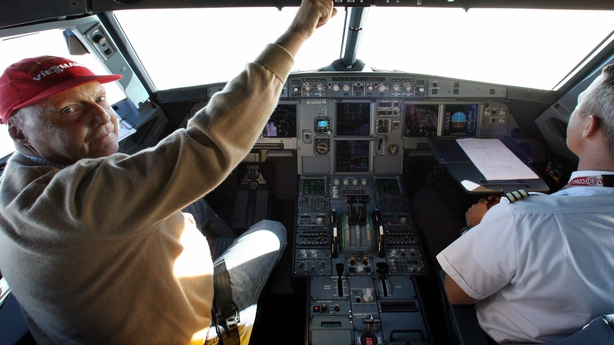 "I met O'Leary recently and we came to an agreement relatively quickly," he said.

Ryanair will invest less than €50m, though will provide an additional €50m in funding for start-up and operating costs in the first year.

Laudamotion will start flying from Germany this week, from Switzerland in April and from Austria in June, Lauda said.

Ryanair has for two decades operated only Boeing 737s, a model that it says allows for significant flexibility and savings on training and maintenance.

But Michael O'Leary said Laudamotion would support a fleet of Airbus aircraft "which is something we have hoped to develop within the Ryanair group for some years."

An Airbus fleet could give O'Leary leverage in future orders from Boeing and would allow it to hire pilots trained for Airbus as well as Boeing planes in an extremely competitive European labour market.

Aer Lingus, which Ryanair was twice blocked from buying by European regulators, operated an all-Airbus fleet.

The Laudamotion deal will be a rare acquisition for Ryanair, which has not bought an airline since Buzz in 2003. Ryanair closed that airline a year later.

Niki Lauda said that he had always stood up for competition and have opposed monopolies.

"Therefore I am thrilled that in the partnership with Ryanair, LaudaMotion will be able to establish itself as a strong competitor and to grow quickly and sustainably," he said.

"A new player in the aviation market is born and I am looking forward to offering our passengers an extensive route portfolio at competitive air fares," he added.