Preliminary figures from the Central Statistics Office show that seasonally adjusted goods exports grew by 16% to stand at €12.331 billion in January, up from €10.657 billion the previous month.

The CSO said that seasonally adjusted imports decreased by 1% to €6.820 billion during the same time.

This resulted in a 46% increase in the seasonally adjusted trade surplus to €5.511 billion in January.

Today's figures show that the unadjusted value of goods exports for January stood at €11.925 billion, an increase of 20% compared with January 2017.

Exports of organic chemicals increased by 86% to €2.497 billion, the CSO said, while exports of medical and pharmaceutical products rose by 39% to €4.318 billion in January compared to the same time last year.

But exports of electrical machinery, apparatus and appliances decreased by 42% to €437m.

The CSO said the unadjusted value of goods imports for January of this year rose by 12% to €6.431 billion.

Imports of medical and pharmaceutical products increased by 88% to €1.043 billion in January compared to the same time last year, while imports of other transport equipment, including aircraft, rose by 28% to €744m.

The CSO noted that exports to the UK increased by 25% in January of this year to €1.181 billion compared to the same month last year. The increase was almost entirely in chemicals and related products.

Meanwhile, imports from the UK grew by 9%, with the main increases in mineral fuels, lubricants and related materials and chemicals and related products. 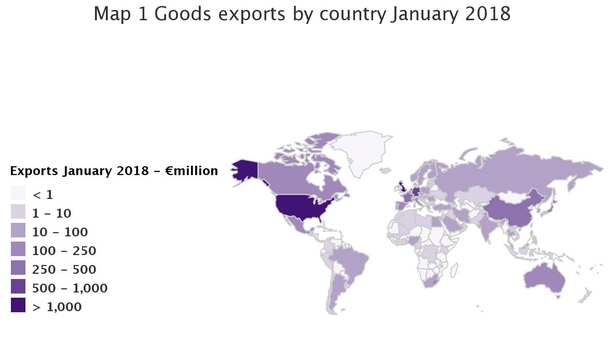 The EU accounted for 46% of total goods exports in January, while the US was the largest export destination accounting for 32% of total exports during the month.

Goods imports from the EU made up 57% of the total value in January, while the USA with 22% and China at 7% were the largest non-EU sources of imports, the CSO added.